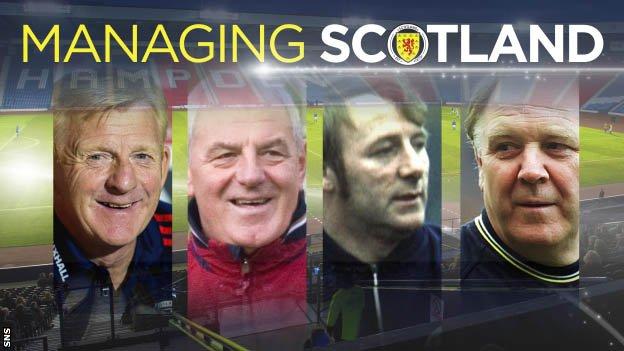 Scottish football fans are to be given a unique insight into what it is like to manage the national team, as BBC Radio Scotland continues a new documentary series.

There are only 10 men still alive who have first-hand experience of the highs, lows, trials and tribulations of leading the national side and broadcaster Chick Young speaks to each of them as they tell the real story of their time at the helm.

The series follows on from "Managing the Old Firm," in which Young profiled some of the most renowned Celtic and Rangers bosses through the years - including Graeme Souness, Billy McNeil, Dick Advocaat and Gordon Strachan - and he said it was the reaction to this that inspired the idea to delve deep into Scotland's managerial history.

"Over many years, my job has demanded I spend a lot of time with, and get to know, managers and I find it a truly fascinating thing observing them, because I see what the jobs do to them and what they mean," he said.

"The 'Managing the Old Firm' series was a huge success and the idea was to do the same for Scotland.

"We have an interesting past, if you consider that, up until 1958, Scotland did not have a manager and were instead led by a select team chosen by a committee.

"So, it was important to look at how things have developed and hear it from those who know best."

From the oldest surviving boss, 91-year-old Bobby Brown, who was in charge in the 1960s and is most notably remembered for masterminding a 3-2 victory over England at Wembley, through the likes of Walter Smith and right up to George Burley and Craig Levein, the set of interviews explores each of the men's tenures and the impact that has been felt by them.

And, for Young, while their footballing records are there for all to see, it was key to get them to also reflect on what they dealt with off the pitch.

"For all these people, what came out of it was a great affection for the country, for doing the job and you are also able to get a real feel for how it affected them personally - and how they could not really refuse the job," he said.

"Tommy Docherty actually said his big regret was leaving the job to go to Manchester United.

"They have all been keen to put on record exactly what happened during their reigns. When you think about the troubles that the likes of George Burley and Craig Levein had, that is quite something in itself.

"I did wonder whether they would do it, but they did it and did it with their heart. They talked very, very frankly - it is almost like a confessional, getting it off their chests and emptying their souls."

In the latest interview, Alex McLeish discussed his eight-month spell in charge of the national team.

"I'd never envisaged going into international football at that stage of my life, I thought I'd still be involved in club football," he explained.

"Somebody asked me: 'Would you fancy the Scotland job?' and I said 'I don't think so at this stage of my career.'

"Then I got the call and, wow, that was a whole different ball game, it changed everything. Now it was deadly serious and it was just something I could not turn down."

His frank account of what went on at that time, and reflections on it now, gives a telling look ahead to the journey Young will take listeners on with each instalment.

"There was a lot of humour in the interviews," said the broadcaster.

"There are big admissions to come - and honest ones at that. I was surprised at how honest they all were. There was no avoiding a question. It really gets to the heart of the big issues they faced."