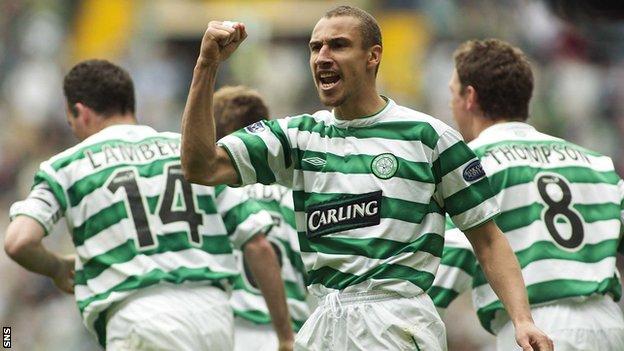 Henrik Larsson being appointed Celtic manager would be he equivalent of Johan Cruyff returning to Ajax or Barcelona, says Jan Vennegoor of Hesselink.

The Dutchman was talking the day after Neil Lennon stood down after four years as boss of the Scottish champions.

Vennegoor of Hesselink is not surprised to see fellow former Celtic striker Larsson emerge as a possible successor.

"Everybody would like to see Henrik back at Celtic - it would be a great love affair and he said also that he maybe wants to come back here in the future.

"With the backing he would get from the club and fans, it would be a great role for him and he is still young, too.

"It would be like Cruyff going back to Ajax or to Barcelona - one of the biggest and most successful players going back to Celtic."

However, the 42-year-old is not the only former Celtic player to have emerged in the betting to succeed Lennon.

David Moyes, recently sacked by Manchester United, and Malky Mackay, dismissed by Cardiff City earlier in the season, are both available.

Owen Coyle, a Celtic supporter, has also been without a club since exiting Wigan Athletic in December.

Paul Lambert, whose future with Aston Villa has been questioned, and Jackie McNamara, whose work at Dundee United has earned praise, are also among those being linked with the role.

"A lot of people will be interested in having the job - a lot of big names," said Vennegoor of Hesselink

"I think it needs to be someone with a Celtic background because it's a club on its own.

"If you come from outside, you need to adapt first and that can be difficult as you don't get time as a Celtic manager.

"It is always a big task as a Celtic manager, because you always have to have success."

Vennegoor of Hesselink was surprised at the timing of Lennon's departure. "I would have thought he would go for his fourth or fifth championship," he said.

"On the other hand, if you look at all that happened, it was just a good time to say goodbye and focus on something new and I think he made a good decision.

"He did a very good job. He bought players for not a lot of money and sold them for loads of money, so he did a great job as a manager.

"If you look at Holland, the last club to reach the last 16 in the Champions League was a long time ago yet Lenny did it a couple of times."