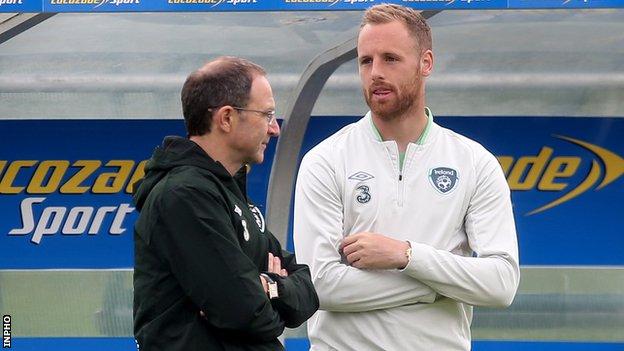 Midfielder David Meyler is expected to be available for the Republic of Ireland's friendly against Turkey after taking part in training on Saturday.

The Hull City player, 24, has struggled with a calf injury and sat out the two previous days of training.

Midfielder James McCarthy has been ruled out of Sunday's clash at the Aviva Stadium, while Robbie Keane is also absent.

The Republic also face Italy, Costa Rica and Portugal in the coming weeks.

LA Galaxy striker Keane will also miss the match against Italy on 31 May but will be available for next month's games against Costa Rica and Portugal.

He has been excused from Sunday's game in Dublin and the contest against Italy at Craven Cottage.

But he will join up with Martin O'Neill's squad ahead of the meeting with Costa Rica in Philadelphia on 6 June and Portugal in New Jersey on 10 June.

"It's very intense out there," he said. "We are looking to keep this intensity for a couple more weeks. We can all have our holidays after that."