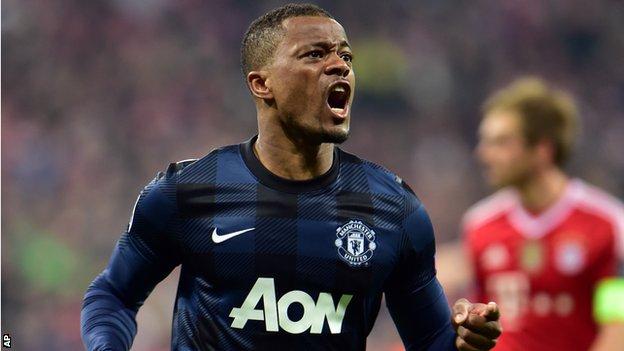 The French left-back's previous deal had been due to expire in June.

Evra, 33, made 45 appearances for United in all competitions this year as the Old Trafford club finished seventh in the league after a disappointing season under David Moyes.

But Evra's decision to remain at United will have no impact on their attempts to sign Southampton's Luke Shaw, 18.

United have already lost three senior players in former captain Nemanja Vidic, who is to join Inter Milan, midfielder Ryan Giggs, who has retired, and defender Rio Ferdinand, who announced he will leave the club.

Giggs, 40, ended his playing career after 24 seasons at United but will begin a new role as assistant to van Gaal when the Dutchman takes over.

Signed by Sir Alex Ferguson from Monaco for £5.5m in 2006, Evra has won five Premier League titles, three League Cups and the Champions League during his time at Old Trafford.

The decision to retain Evra, who has previously served as United captain, may affect Van Gaal's choice of new captain, a role for which Wayne Rooney said he would like to be considered, despite reports Robin van Persie would be favoured.

Evra is currently preparing for the World Cup in Brazil with France, who face Honduras, Switzerland and Ecuador in Group E.