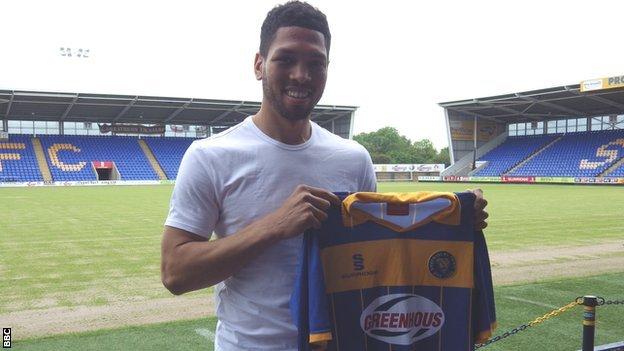 The 27-year-old London-born centre-half has made 56 appearances for Posh since signing from Wrexham in May 2011.

He spent two years at The Racecourse Ground after five seasons at Histon, where he came through the youth ranks.

"To be released by Peterborough at the end of the season was disappointing," he told BBC Radio Shropshire.

"But the manager showed a lot of interest in bringing me here. He's a very ambitious man and he really sold it to me.

"Micky's teams have always been hard to play against and have been good footballing teams. It will be nice being on the other side of that.

"You want to play as high as you can, so the manager and the staff will do their utmost to get Shrewsbury back to League One."

Following the release of both last season's two first team keepers - Chris Weale and Joe Anyon - Mellon is still searching for an experienced first-choice number one.

But he has confirmed that Burton and Lewis are in his thinking.

"I know all about them," Mellon said.

"They are two terrific prospects. They'll get their opportunity, like everybody else, to impress.

"I don't know what it is about Shrewsbury, but they produce fantastic goalkeepers.

"We have got a few goalkeepers in mind that we are speaking to and we'll look to try and bring somebody in with the credentials which could make us successful."