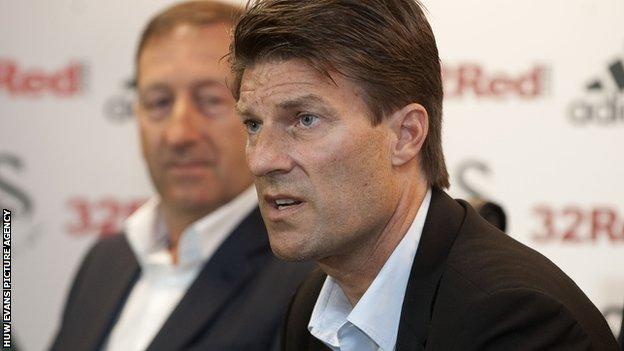 Swansea City have reached a settlement with former manager Michael Laudrup over his sacking.

The Dane, 50, was dismissed in February after 18 months in charge.

At the time, Laudrup said he was considering taking legal action, having claimed he was sacked by email hours after being told his job was safe.

Garry Monk, Laudrup's replacement, was appointed on a permanent basis this month after steering Swansea to a 12th-place finish in the Premier League.

A Swansea statement read: "Everyone at Swansea City Football Club would like to wish Michael all the best for the future."

In his first season he led Swansea to ninth place in the Premier League and to League Cup glory, their first major trophy.

That success earned them a place in this season's Europa League, a campaign that featured a 3-0 win at Spanish top-flight side Valencia in September.

But Laudrup was sacked after the 2-0 league defeat at West Ham on 1 February, a sixth defeat in eight league games which left them two points above the relegation zone.

He said he was sacked by email, having been told his job was safe and shaking hands with chairman Huw Jenkins.