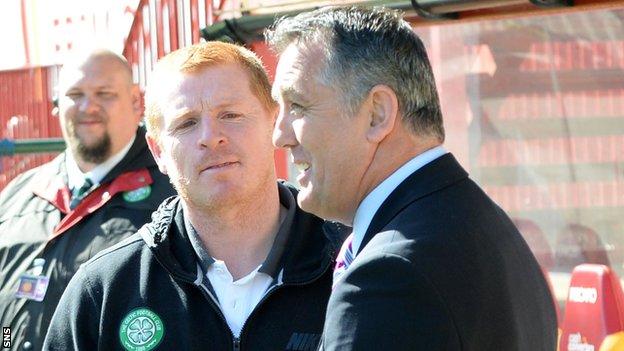 Owen Coyle says managing Celtic would be a "huge job" after the 47-year-old emerged as one of the bookies' favourites to succeed Neil Lennon.

Coyle was linked with the job before Lennon began his four-year tenure, which he decided to end this week.

But the Scot, who was sacked by Wigan Athletic in December, was coy when asked about any renewed interest.

"Glasgow Celtic are a global club, there's no doubt about that - and of course it's a marvellous job," he said.

Regardless of people's perceptions, Glasgow Celtic is a huge job, it's an elite club

"Like anything else, the bookies' (odds) change very quickly. I don't think I was the favourite yesterday.

"I think people put two and two together.

"The bottom line is that it is well-documented that Celtic are my team and that will never ever change."

Former Celtic striker Henrik Larsson had been a strong favourite with bookies until his present club, Swedish top-flight outfit Falkenbergs, said he had rejected an approach from an unnamed club.

Pressed on his interest on BBC Radio 5 live, Coyle said such distinguished names were no surprise given Lennon's legacy and the work of Celtic's present chief executive and owner.

"Regardless of people's perceptions, Glasgow Celtic is a huge job, it's an elite club," he said.

"If you go anywhere in the world, Glasgow Celtic are known, their jerseys are there.

"Peter Lawwell, Dermot Desmond, the owner, the model they have put into the club has brought them success and Neil Lennon's been a huge part of that as well."

Coyle thought that Lennon, with whom he worked last month on a television assignment, was capable of realising his dream of managing in England's top-flight.

"It's not been a secret that he'd love to work in the Premier League, as everybody would - it's the best league in the world," added the Paisley-born former striker who represented Republic of Ireland.

"We did a couple of European games for an Irish TV station and you could tell he's really evolved in the role and I think he's probably got to the point now that he feels another challenge awaits him.

"I've got no doubt there will be a very good job for him out there.

"If it's not just now, it may be over the summer or the start of the season, but he's certainly capable of managing at the top level."