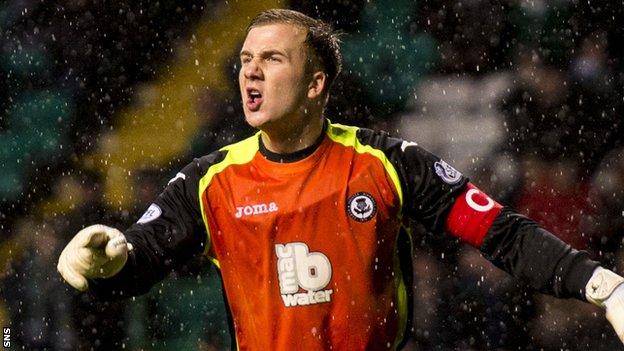 Partick Thistle are hopeful that goalkeeper Scott Fox will be fit in time for the start of next season despite a bad final-day ankle injury.

The 26-year-old was taken off just before half time as Thistle ended the season with a 3-2 loss to Ross County.

Physio Kenny Crichton said the injury was not as bad as first feared.

"He should be back training during the pre-season and be fighting fit to push Paul Gallacher for the first set of games in August," he said.

"There's no doubt a long journey ahead for him, but nobody works harder at this club than Scott Fox and we've got all the tools and people here to help him progress."

Crichton, who is leaving the Scottish Premiership club after five years at Firhill, told Thistle's website that there would be no surgery required for the injury picked up when Fox had collided with County striker Jordan Slew.