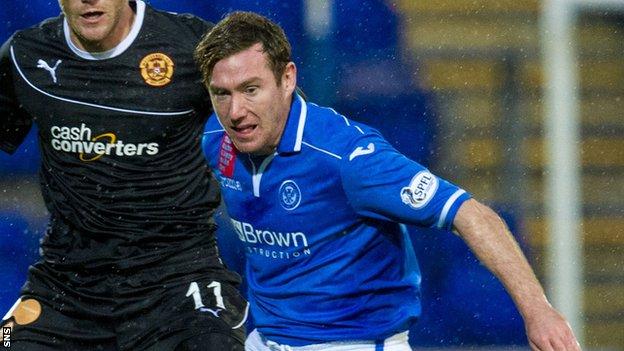 Midfielder Paddy Cregg was released by St Johnstone to allow young midfielders a chance to blossom in the first team, manager Tommy Wright has revealed.

Wright revealed it was his hardest decision when announcing the departure of four senior players this summer.

"Padge is a great lad and has done very well for us, so it was not nice telling him I wasn't keeping him," Wright told St Johnstone's website.

"But I feel we are top heavy with midfielders."

Nigel has contributed over the past two years, but he is one of our highest earners

Irishman Cregg has been a first-team regular since the former Arsenal, Falkirk, Hibernian, Morton and St Mirren midfielder returned to Scotland to join Saints in 2012 after a spell with Bury.

But he was on the bench for the Scottish Cup final victory over Dundee United.

"Young Scott Brown showed against Celtic that he's ready to stake a claim," said Wright. "He keeps the ball and passes like Padge.

"We also have Liam Caddis in the mix and we don't want to block the progress of our talented younger players.

"It's essential that they can see a pathway to the first team."

Wright explained that the Dutchman, who moved to McDiarmid Park after rejecting an improved contract from St Mirren in summer 2012, exited after failing to return his telephone calls.

"Nigel has contributed over the past two years, but he is one of our highest earners," said Wright.

"He said to me back In January that he would make a call at the end of the season.

"I wanted to speak to him face to face, but he went back to Holland and isn't picking up his messages and so I have dealt through his agent."

Hasselbaink, who first moved to Scotland to join Hamilton Academical after exiting PSV Eindhoven, has been quoted as saying he would like to play in English football.

Meanwhile, defender Tim Clancy has been offered the club's facilities to help in his rehabilitation after injury despite not being offered a new contract.