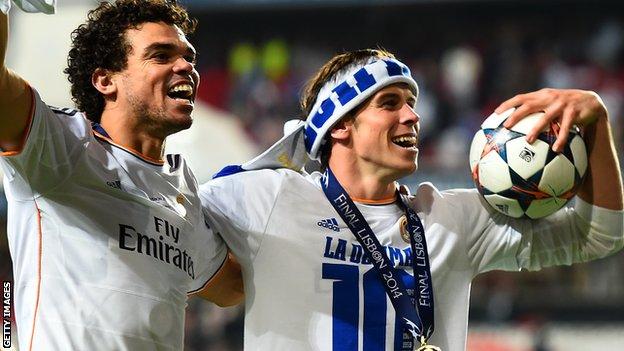 When Gareth Bale was presented as a Real Madrid player in front of thousands of supporters at the Bernabeu, he was immediately acquainted with the weight of expectation that came with his arrival.

In a lengthy introduction for the world's most expensive footballer, club president Florentino Perez outlined what he expected in return for the £86m his club handed over to Tottenham.

He said: "We are the most demanding club in the world but we will always be by your side."

History tells us that this rule can be rather flexible at Real Madrid. Succeed and they will be by your side - fall short and plenty can produce evidence of how quickly they can cut you adrift.

And it was on nights such as this, as Madrid decamped to Lisbon for the first one-city final in Champions League history, when those demands are at their most intense, when moments can decide whether Real will stand at your side or you become another casualty of their ruthless pursuit of success.

Amid a tumultuous atmosphere in the Estadio da Luz, with Real confronted by arch-rivals Atletico mirroring the hunger, desire and intensity of their combustible Argentine coach Diego Simeone, Bale answered the call.

The list of demands Real made of Bale included helping end a 12-year sequence without the Champions League and finally deliver "La Decima" - their historic 10th win in the competition.

For long periods of an absorbing final, Bale trod the wrong side of the line that can define players of his calibre on occasions such as this. The chances came and went as Atletico fiercely protected the lead Diego Godin's first-half header had given them.

Sergio Ramos's equaliser deep into stoppage time floored Atletico, if not Simeone, and it was left to Bale to ensure his name will be remembered for ever whenever the story of Real Madrid is recounted.

Undaunted by his previous frustrations on a night when he was not at his best, Bale did what players of the greatest quality do. He still managed to exert influence on Europe's biggest club game when he was needed.

The moment that may just have been in the 24-year-old Wales star's mind's eye when he indulged in some showboating for his new fans in the Bernabeu sunshine last summer arrived with 10 minutes of extra time left.

Man of the match Angel Di Maria's shot was blocked by the legs of Atletico keeper Thibaut Courtois and Bale's natural instincts and optimism sustained him enough to follow up and direct an angled header into the net.

In that moment "La Decima" - the mission which has hung like a dark cloud over Real in the 12 years since they last won the Champions League against Bayer Leverkusen at Hampden Park - was finally secured.

It set up a moment of history for Real with their 10th triumph, history for coach Carlo Ancelotti as he joined Liverpool's Bob Paisley in winning the trophy for the third time and ensured Real will remain at Bale's side for many years to come.

Real and Bale may say it was the sort of history-shaping moment that sparked emotions money cannot buy - but in reality it was the contribution they envisaged when they concluded a summer of negotiation with Spurs chairman Daniel Levy by parting with £86m.

Further goals from Marcelo and a Cristiano Ronaldo penalty may have deprived Bale of the status of match-winner, but he hardly looked troubled as he danced in front of Real's fans draped in the Wales flag.

When examined in years to come, the emphatic 4-1 winning margin will go nowhere near telling the tale of this epic piece of local rivalry with Atletico, downtrodden by Real for so long, just moments away from securing a victory of the sweetest redemption before Ramos broke their resistance.

It will not illustrate the magnificent defence of Uruguay's Godin and the relentless approach of Atletico's Koke and Gabi, a symbol of their renaissance under Simeone.

It will not tell of the compulsive viewing provided by Simeone, slicked back hair and black shoes glinting in equal measure under the glare of the floodlights, of how the Argentine lives on the edge, racing on to the pitch to confront referee Bjorn Kuipers at the break in extra-time and how he appeared dangerously close to offering an old-fashioned "straightener" to Real's Raphael Varane for kicking the ball in his direction after a goal.

Simeone was applauded in and out of his press conference by Spanish journalists who admire his determination to fight Atletico's bigger and more powerful rivals, an approach he seems a little too willing to take literally at times.

And then there was Ancelotti, his own conference hijacked by a group of Real players led by Ramos, embracing the popular Italian while singing the club song.

Ancelotti is one of football's nice guys, with a neat line in dry humour and a sanguine approach that ensures he does not get too high in victory or too low in defeat.

He was dignified in defeat when Liverpool beat his AC Milan side in Istanbul in 2005 and here he was gracious in victory, qualities he shares with the late, great Paisley, who would have approved of Ancelotti's measured outlook.

This was an occasion to make Madrid proud. Real's fans revelled in their win but there was a faith-restoring moment after Marcelo's goal which ended any hopes of Atletico adding the Champions League to La Liga, won after an 18-year gap.

As one, the Atletico fans at one end of Estadio da Luz, to the left of Simeone, rose in spontaneous applause for the players who had given so much but who were now lying on the turf in despair. The noise levels increased in a wonderful show of support.

And at the final whistle there was Bale, beaming with delight as ticker tape rained around him, clutching his medal and acknowledging his homeland's proud heritage with his flag.

Perez had laid out his demands and Bale had met them on the biggest European club stage of all. He came through adversity in the first 110 minutes to do it - but that was the price Real were prepared to pay to sign him.