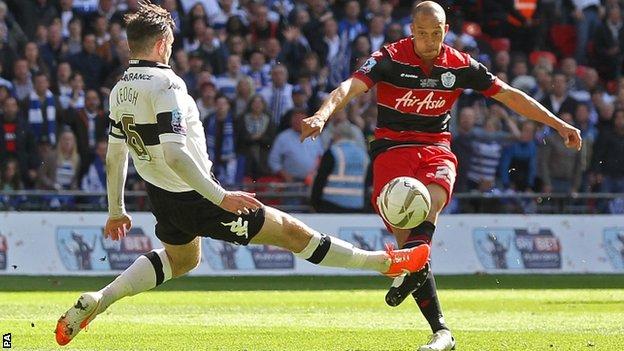 QPR manager Harry Redknapp admits he could not see his side scoring before Bobby Zamora's last-minute winner in the Championship play-off final.

Zamora scored with Rangers' first shot on target in the 90th minute as they overcame Gary O'Neil's dismissal to beat beat Derby County 1-0 for a place in the Premier League.

"It was a fantastic finish. I couldn't be more pleased," said Redknapp.

I knew we would do it but I feel sorry for Derby, they played fantastic today and they deserved to win

"I'd be a liar if I said I could see us scoring. We were hanging on."

Rangers played for more than half an hour with 10 men following the dismissal of O'Neil after he tripped Johnny Russell as the Derby attacker burst towards the box.

Redknapp felt O'Neil might have escaped with a yellow card and admitted the decision had left his side hanging on.

"I thought he wasn't the last man, there was another defender behind him," Redknapp added. "I thought he would get a yellow but that's life.

"We were bang in trouble but we showed great character and it was amazing. That was a one-off where you stand on the touchline, hanging on for grim death and get a goal like that.

"I wanted to do it for the people here [at Wembley], the owners and the players. They are fantastic people."

QPR keeper Rob Green revealed he dislocated his thumb with 25 minutes left: "I felt like throwing up in my goalmouth.

"This year was never about a World Cup, it was about starting my career again. Proving myself as a goalkeeper and as a person and coming out fighting. I am so pleased for everyone involved at the club."

Centre-back Richard Dunne was key to Rangers' success as he and his defensive colleagues kept waves of Derby pressure at bay. 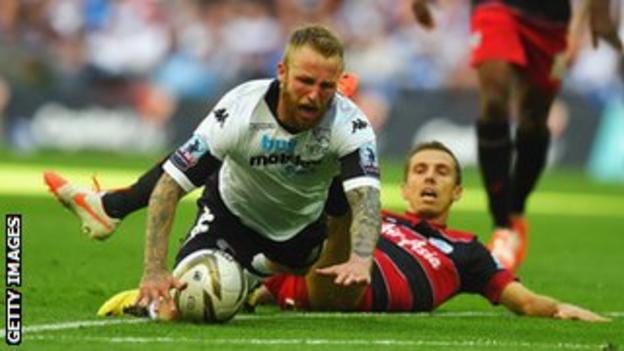 Dunne said: "It's amazing. It's been such a long hard season. We know how good we can be when we worked and we've worked really hard.

"When the time came Bobby was there to finish it. It's what we've been aiming for all year and we got there through the play-offs."

Rangers midfielder Joey Barton claimed Derby deserved to win after the Rams had dominated for long spells. However, a late lapse from defender Richard Keogh let in substitute Zamora to finish calmly with a left-foot strike.

"We have a habit of doing it the hard way," Barton told BBC Radio 5 live. "I knew we would do it but I feel sorry for Derby, they played fantastic and they deserved to win.

"That could have been us. They are young enough to bounce back and we'll make the most of it."