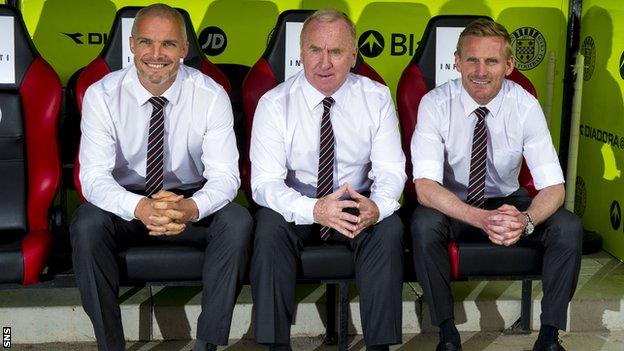 Jim Goodwin has revealed his promotion to a player-coach role at St Mirren "came out of the blue".

"I was desperate just to get a playing contract and remain at the club," the 32-year-old told BBC Radio Scotland.

"And then the opportunity to become part of the coaching team was one that caught me by surprise, but one I am really, really looking forward to."

Former Celtic and Hamilton player Goodwin, who has one Republic of Ireland cap, described how his close season experience has already changed.

"Usually, as a footballer, you finish the last game of the season and you are not thinking about it until the first week of July," he explained.

It is only a title as far as I am concerned. My day-to-day role at the club is not going to change

"Now, my phone has been going with agents offering players. They cannot get to Tommy, so they are going through me and Tealey and maybe we are too naive at the moment as we are answering the phone.

"It is great; it is a fantastic opportunity for me, I am still only 32 and I feel that it was an opportunity I just could not turn down."

As well as what Goodwin describes as "a big, big recruitment job", St Mirren face the task of trying to retain out-of-contract Kenny McLean and fellow midfielder John McGinn.

"We would love Kenny to stay, John McGinn, too," Goodwin said.

"We are going to need guys that are hungry and have got a desire for the game and good pros who are willing to fit into the team spirit that we have created in the club already.

"Hopefully we can keep the majority of those boys together."

And Goodwin remains keen to be part of the first team as the Buddies embark on their ninth successive season in Scotland's top flight.

"We have almost been coaching for the last three years anyway," he added. "It is only a title as far as I am concerned. My day-to-day role at the club is not going to change.

"I am going to be involved heavily with the under-20s and trying to bring the young boys through into the first-team squad.

"The experience that I can pick up from Tommy, I am very, very grateful to him for giving me this opportunity."