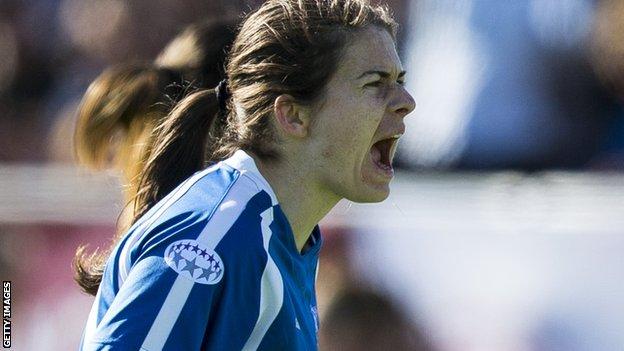 Birmingham held onto top spot in the Women's Super League with a 1-1 draw at champions Liverpool.

The Reds carried most of the first-half threat, but fell behind to a 23rd-minute penalty from Karen Carney.

Birmingham top the table by two points, but will be overtaken by Notts County if they beat Chelsea on Sunday.

Liverpool, who would have climbed to the summit with victory, did most of the early pressing at Widnes.

And her efforts were rewarded when Birmingham went ahead through Carney after midfielder Jade Moore was fouled by keeper Libby Stout.

Spencer denied full-back Lucy Bronze with an excellent stop as the Reds responded, before Natasha Dowie shot narrowly wide from a Williams cross.

Carney almost scored her second goal of the evening with a 56th-minute shot that flew just over the bar.

But Liverpool deservedly drew level when Williams drove in from the spot following a foul on Hannah Dale by Aoife Mannion.

They were denied a late winner when Spencer dived to keep out a Davison shot four minutes from time.