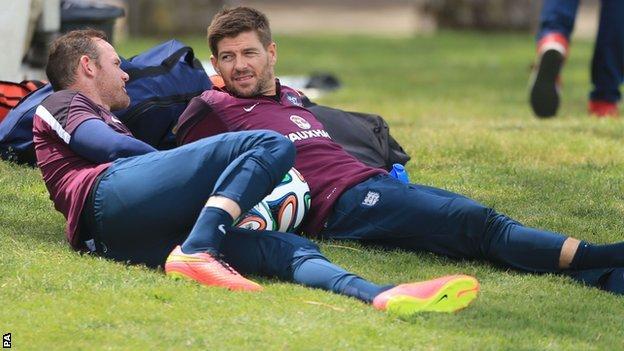 Captain Steven Gerrard says he will decide whether to continue playing for England after this summer's World Cup.

He will talk to national boss Roy Hodgson and Liverpool manager Brendan Rodgers after returning from Brazil before making a decision on his future.

"I'm not going to leave anyone hanging," said Gerrard. "I won't stay around if I'm not wanted."

England begin their World Cup Group D campaign against Italy in Manaus on 14 June, before games against Uruguay and Costa Rica.

Gerrard said: "I'll sit down with the manager at the right time and I'll make the decision.

"It does depend on how the World Cup goes, how I perform, how the team performs. Am I still going to be wanted after the World Cup?"

Hodgson, meanwhile, thinks his World Cup squad is superior to the one he took to Euro 2012.

The 66-year-old said: "You want to be excited by what you see. With respect to the 2012 group, I don't think we had it to anywhere near the same extent."

England face Peru in a friendly at Wembley on 30 May before travelling to Miami for further warm-up matches against Ecuador and Honduras.

And Hodgson is "hopeful" Team Sky boss Sir Dave Brailsford will give a motivational talk to his squad before they fly out.

Brailsford transformed cycling during a 10-year tenure as performance director of British Cycling.

"Dave's working hard and he'll do his utmost to be there," Hodgson said.

"I can't ask to pin him down because he's got a big, big job and part of his big job doesn't really involve coming to St George's Park to speak to England players."