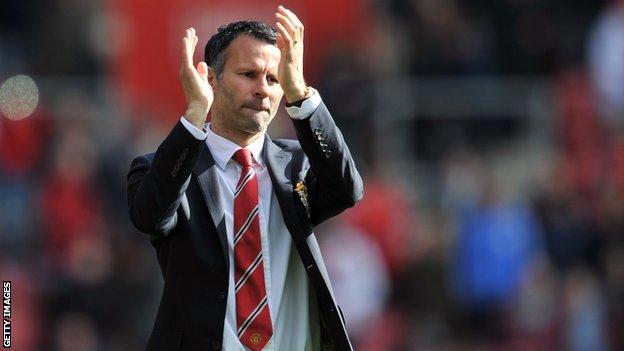 Giggs has retired from playing after being named assistant to new boss van Gaal, currently the Netherlands coach.

Ex-United goalkeeper Van der Sar played alongside Giggs and was coached by Van Gaal at Ajax and with the Dutch.

"I'm sure under the guidance of Louis he can become an even better coach or manager in the future," Van der Sar said.

"Even when I played with him he was busy with his coaching badges and the philosophy of the club is in the right hands with him.

"Ryan is going to be there as assistant manager and that should be enough, with his experience, to bring United in a better frame than this year."

Giggs, 40, who made a club record 963 appearances for United, was placed in interim charge of United for their final four games of the season following David Moyes' sacking.

United decided to go for an experienced manager rather than appoint Giggs permanently and opted for former Barcelona and Bayern Munich coach Van Gaal.

Van Gaal, 62, has signed a three-year contract and will take charge at Old Trafford after leading the Netherlands at this summer's World Cup in Brazil.

Van der Sar, who ended his playing career with United, won the Champions League with Ajax in 1995 during Van Gaal's time in charge of the Amsterdam club.

The former Dutch goalkeeper, a Champions League winner with United in 2008, believes his fellow countryman will be successful at Old Trafford.

"The main thing is he has the pedigree," Van der Sar told BBC Radio 5 live's Sportsweek.

"He's won trophies in Spain and he did an excellent job in Germany with Bayern Munich, that's also not an easy club to go to with all the powerful people that are there in the stands.

"He also has experience with the national team being at the World Cup so he has the respect of the players I presume.

"He likes attacking football, he's tactically very strong and he likes to prepare teams to the smallest detail.

"He has a very clear vision on how he wants to play and I think that's very important at United.

"I've been there six years and the way the supporters want Man Utd to play, I think that's very important to bring United back to the place where it belongs."