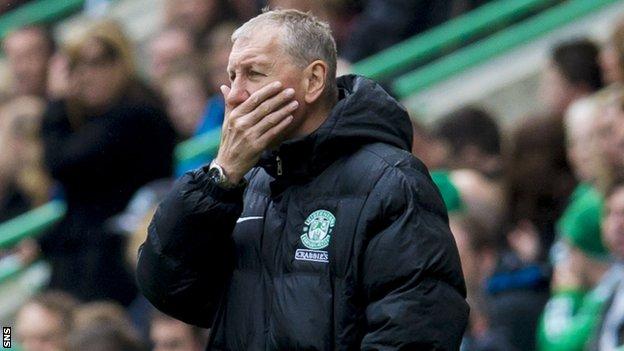 Hibernian manager Terry Butcher has described watching his side's relegation to the Championship as his "darkest day in football".

Hibs lost on penalties to Hamilton Academical after a 2-2 aggregate draw in their Premiership play-off.

"It's the worst ever. I've been relegated before as a boss and player, it's horrible," he told BBC Scotland.

"I must give Hamilton full credit, they can certainly play and they did today. It's my darkest day in football."

The Edinburgh outfit headed into the game at Easter Road, holding a 2-0 aggregate lead.

However, goals from Jason Scotland and Tony Andreu forced extra time and penalties.

Kevin Thomson and Jason Cummings both had penalties saved to seal Hibs' fate, sending Hamilton Accies up to the Premiership and sparking a protest by several hundred angry Hibs fans outside the stadium following the final whistle.

"Whether I continue in the job is up to other people, but I want to continue," said Butcher. "I'm extremely angry, but I'll take the responsibility because we've had time to put it right.

"It was like watching a car crash today, to be honest. And it's been like that in the past few months.

"It's not just about today but the previous games and we haven't done enough to get ourselves out of trouble.

"We were talking about going for the top six a few months ago. Now we find ourselves relegated."

At that time, Hibs were seventh in the Premiership with 15 points from their first 13 league games.

However, they only took 20 more points from their 25 league games under Butcher, and were consigned to the play-offs after finishing 11th.

"I must give full credit to Hamilton. They came at us today and, for some reason, we sat off the game and allowed them to play and they can certainly play," added Butcher.

"We had it there with a minute and 15 seconds to go. We were fine, but we've conceded a goal and then extra time is a bit of a lottery in many aspects because both sets of players were extremely tired.

"Then it gets to the penalties and, well, there you go. I can't point to bad luck because it's more than bad luck.

"You felt when it went to penalties that we've got a bit of a chance, but when you miss the first one then you're always up against it."