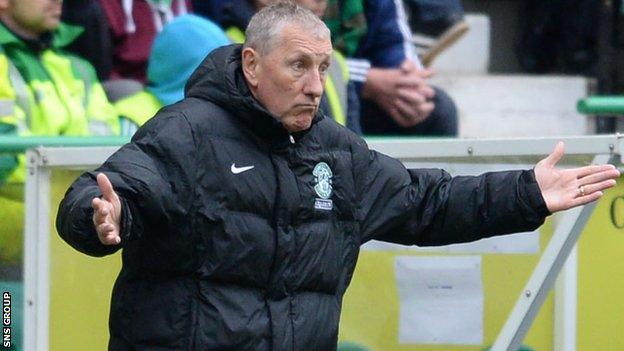 Manager Terry Butcher and chairman Rod Petrie have vowed to stay on despite Hibernian's relegation to the Championship.

Angry fans gathered outside Easter Road to protest after the club's play-off loss to Hamilton Academical on Sunday.

However, Butcher said: "I remain determined to work to rebuild a team to get this club to where it belongs at the top of Scottish football."

And Petrie insisted: "It would be wrong for me to walk away."

Hibernian surrendered their top-flight status after a penalty shootout, having thrown away a 2-0 first-leg lead in front of their own supporters.

Butcher, 55, told BBC Scotland that the defeat was his "darkest day in football".

The former England captain then said, via a statement: "We are devastated that our season has ended in this way, and we can only apologise to supporters for letting them down.

"I knew when I took on this role that it would be a challenge. I can assure supporters they will see very different performances and results next season."

Butcher left his job at Inverness Caledonian Thistle to replace Pat Fenlon in November and, after early signs of promise, Hibs slowly tumbled down the league table, with a closing run of just two wins in 21 games.

In the same club statement, Petrie said: "I am sorry for a dismal season on the pitch. The season started badly last July against Malmo in the Europa League (a Scottish record 9-0 aggregate loss) and has finished even worse with relegation to the Championship.

"The manager and players know that performances on the pitch have not been good enough. To lose the play-off at Easter Road Stadium after extra time and penalties, having put ourselves in a great position after the away tie at Hamilton, is a bitter pill for everyone to swallow.

"Having already announced a few weeks ago that I am handing over my executive responsibilities, it is in the best interests of the club for me complete that transition to our new chief executive and to oversee the other far-reaching changes at the club as non-executive chairman.

"Leeann Dempster has already been appointed as chief executive to lead the club forward. She will join us in the next few days. Leeann achieved sporting success at Motherwell and will work closely with Terry Butcher as the club begins the task of assembling a competitive squad for next season.

"Leeann's arrival is the first of a number of planned changes in the coming weeks and months ahead at Hibernian."

"In essence, this summer will be a pivotal point in the long history of Hibernian, creating a new platform to take the club forward in a positive, energetic and sustainable way."

Petrie has been on the board at Easter Road since 1996 and became chairman in 2004, with Butcher the seventh managerial appointment in the past 10 years.