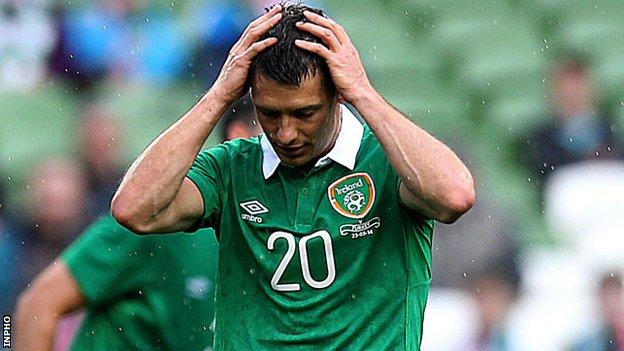 Republic of Ireland manager Martin O'Neill has admitted his team's confidence has been hit by Sunday's home defeat by Turkey.

The Turks' 2-1 victory handed the Irish a second successive home reverse, with Serbia having won by the same score at the Aviva Stadium in March.

"I know it's a friendly, but we have lost and we would have gained more confidence from winning," said O'Neill.

"We created a lot of chances and I don't know how we lost the match."

O'Neill admitted his side's failings have to be addressed quickly if they are to succeed in their mission to qualify for the finals of Euro 2016.

The Republic have another friendly on Saturday when they play Italy at Fulham's Craven Cottage ground in London.

"It was a combination of things - probably poor finishing, some great saves by the goalkeeper too - but we should have had the game out of sight by half-time.

"I thought we played really well. I was just saying in the dressing room, there are big moments in matches where you have to really defend stoutly.

"You might go 10 or 15 minutes in the match and you are coasting through and you haven't been tested. Then, when the big moments come, you have to be stronger.

"That said, genuinely going forward, I thought we were excellent and somebody is going to earn themselves a fortune by being able to put the ball in the net, an absolute fortune."