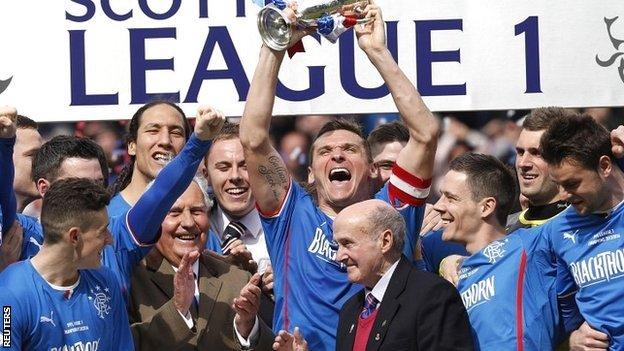 The Scottish Championship will be a more exciting league than the Premiership next season, according to Alloa chairman Mike Mulraney.

Three of Scotland's biggest clubs will feature in the second tier after Hibernian joined Hearts in being relegated, and Rangers won promotion.

Celtic were the Premiership's runaway champions, winning by 29 points.

It's not David and Goliath - it's Goliath and an ant

"The eyes of the nation will be on the Championship as everyone accepts Celtic are going to win again," Mulraney said.

"With only 10 teams, you are looking at a massive game almost every weekend."

Last season Glasgow giants Rangers and Edinburgh duo Hearts and Hibs were three of the five clubs with the highest average attendance in Scottish football, with Celtic and Aberdeen the other two.

Mulraney said it is "quite incredible" the trio will be in the Championship next season.

"Also, they can't all get out so for at least one or maybe two it will be the same again next year," he told BBC Sport.

Rangers have won the top flight a record 54 times while Hibs and Hearts have eight titles between them and 25 major honours overall.

In stark contrast, the likes of Alloa, Dumbarton and Cowdenbeath all employ part-time players.

Alloa's greatest triumph is winning the second tier in 1922 and the Scottish Challenge Cup in 1999.

They played in front of average home crowds of 876 fans this season and only avoided a Championship relegation play-off on goal difference.

Rangers, who were voted into the bottom rung - League Two - in 2012 after financial difficulties, had an average attendance of about 42,000 as they won League One without losing a single game.

Hearts were demoted from the top tier for the first time in 33 years after they were deducted 15 points for going into administration, while Hibs ended a 15-year stay in the top flight after losing their play-off to Hamilton Academical on penalties.

That means Edinburgh will have no representation in the top flight next season for the first time since the Scottish league was established 125 years ago.

Alloa chairman Mulraney said the size difference between clubs in the Championship next season "is enormous".

"You are talking about pros playing for Rangers that will get more than the entire playing squads of probably three of the clubs," he said.

"It's not David and Goliath, it's Goliath and an ant. It's almost breathtaking in its scale but that doesn't mean that they will have an easy ride."

Scottish Professional Football League chief executive Neil Doncaster is adamant the amazing situation will not reduce the attractiveness of the league structure.

"That analysis might have been correct prior to the merger, when the Scottish Premier League was only 12 clubs," he said.

"But the reality is that the SPFL now looks after all 42 professional clubs in Scotland.

"I do not feel it is a loss to the league. It does mean there will be incredible unpredictability and focus on the Championship within Scotland."

Former Hibs captain Pat Stanton admits he has doubts that the Edinburgh side can make it out of the Championship.

"On the evidence of recent form there is nothing to suggest Hibs can be a force in that league," he said.