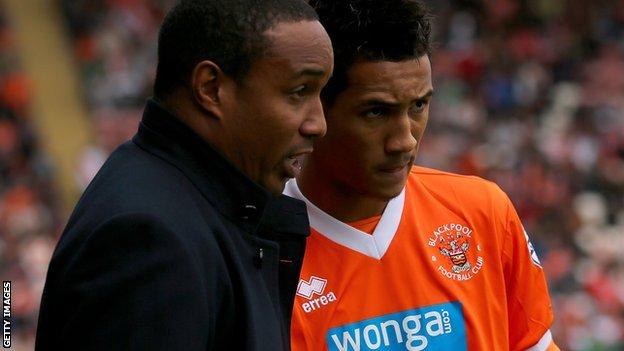 Inter Milan hope to complete the signing of Blackpool winger Tom Ince by the end of this week.

Ince, 22, and his father Paul, who played for the Serie A side between 1995 and 1997, arrived in Milan on Sunday to discuss a potential move.

"We've laid some foundations, now we'll see if we're able to close the deal over the coming days." he said.

The cost of a move to Inter

"It's still early, [but] the player came to Milan because he wanted to have a look at everything for himself.

"We made the most of the weekend that he decided to spend in Milan with his family."

Ince is out of contract at Blackpool this summer and a transfer abroad would earn the Championship side just £155,000 in compensation.

"I'm not an Inter player yet," Ince said. "But I'm very happy to be here two or three days in the meantime.

"Inter have a fantastic squad and Italy is a great country, where I have many fond memories."

But the midfielder was limited to eight appearances, scoring only one goal, and Palace manager Tony Pulis chose not to make the deal permanent.

Although reports have also linked the former Liverpool wideman with French side Monaco and Greek club Olympiakos, Ince has now spoken with Internazionale president Erick Thohir.

"I'm young, English, a winger, a fun player to watch," he added.

"Thohir has told me that there are changes taking place. He wants to return Inter to being big, to win in Italy and in Europe, to take them back to the level of great clubs, on and off the pitch."

Paul Ince is excited by the possibility of seeing his son play for his former club.

"This is an incredible story," he said. "I spent a beautiful time here. For me, Inter is love, the fans transmit passion.

"The important thing for Tom is to be here, to see the training ground, get to know the stadium and the city. Then we will go back home and take a decision."