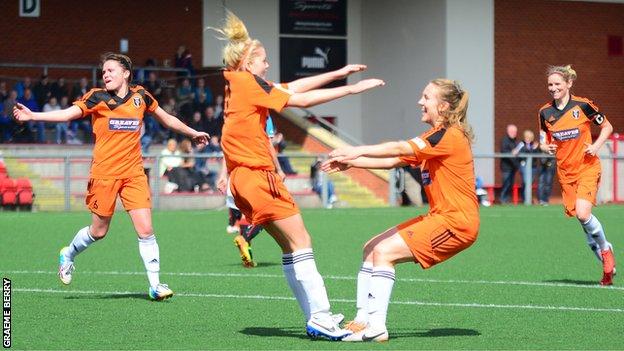 Glasgow City moved five points clear at the top of the table with a 3-2 win over Rangers at Petershill Park.

Rangers remain just a point above Celtic who beat Hamilton Accies 3-1 in front of over 400 fans in the Friday night match at New Douglas Park.

Spartans defeated Hibernian 3-1 while fellow Edinburgh side Hutchison Vale were 2-1 winners at Forfar.

Inverness went down 5-0 at home to Aberdeen and Buchan scored their first win with a 2-1 defeat of Queens Park.

It was Rangers first league defeat of the season with Erin Cuthbert's goal four minutes from time not enough to halt City's 100% start to their title defence.

Celtic move above Hibernian in third on goal difference with Spartans also closing the gap after winning the capital derby.

Aberdeen consolidated their top six spot thanks to doubles from Christie Grimshaw and Hannah Stewart.

Buchan's first win and points of the season means Forfar Farmington are now rooted to the bottom of the table.

The first silverware of the season is up for grabs on Wednesday night when holders Glasgow City face Hibernian at Ainslie Park, home of Spartans FC.