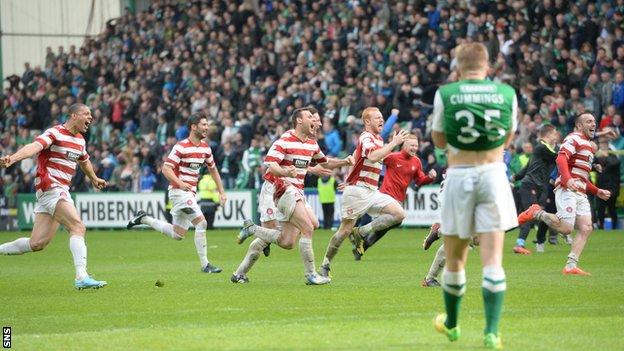 Released former captain James McPake says it is not just the players to blame for Hibernian's relegation.

McPake and 10 others have been told their contracts will not be renewed, while three loan players are leaving.

"There's no way it's entirely the players' fault; the players had got the club to two cup finals," said McPake.

"Admittedly, we got beat in two cup finals but we got them there and we finished quite comfortably in the league last season."

And Daniel Boateng, Danny Haynes and Duncan Watmore are returning to their parent clubs after January loan deals.

BBC Scotland has also learned that several other under-contract players have been told they can either accept a substantial wage cut or find another club.

The manager just said he believed I wasn't fit enough. That's his opinion, it's not an opinion I agree with.

McPake last played in October and missed a large chunk of the season with a back injury, although the 29-year-old defender insists he could have contributed in the final months of a dismal campaign.

"I'm fully fit," McPake told BBC Scotland. "I'm gutted that I've not been on the pitch to help

"I've been training and been fully available for the past 10 weeks. I do believe I could have helped the team out, I've been desperate to help them out.

"The manager just said he believed I wasn't fit enough. That's his opinion, it's not an opinion I agree with. I believe I was more than capable of playing and I'll stand by that.

"I had the operation in December. There were no complications with my rehab and I've felt as good as I have in the past two years."

McPake looked on from the sidelines as a closing run of 13 games without a win resulted in a play-off with Hamilton, which was lost after a penalty shoot-out.

Butcher, who succeeded Pat Fenlon in November, has stressed his intent to stay on and "rebuild a team".

"I don't know what he [Butcher] means by radical change," added McPake. "If he means the players I'm not too sure the squad's as bad as him saying that, but that's his opinion and that's why he's the manager and I'm not.

"The players backed the manager and wanted to win every game. Before you back a manager you're going out for personal pride and your family, you're doing it for them before the manager.

"There's no way anybody in that squad wanted that club to be relegated. I saw 20 grown men in tears yesterday. There's a lot of Hibernian fans in that dressing room as well."