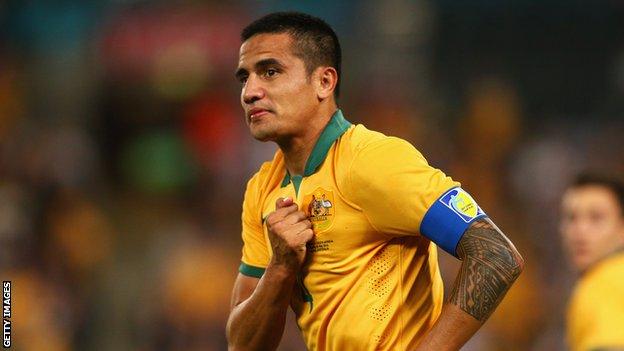 Midfielder Tim Cahill scored his 33rd international goal as Australia were held by South Africa in their final home friendly before the World Cup.

Ayanda Patosi slid in to give South Africa an early lead after fine work by Bournemouth striker Tokelo Rantie.

A minute later, stand-in skipper Cahill capitalised on an error by keeper Senzo Meyiwa to head in Tommy Oar's cross.

But Australia could not force a winner in a tame second half in which a below-strength South Africa defended well.

Ange Postecoglou's side have one more match before the World Cup, against Croatia in Salvador on 7 June.

The Socceroos face a tough World Cup group, with Spain, Chile and the Netherlands their opponents in Group B.

And they seldom threatened on their final home appearance before heading to Brazil, although substitute Oliver Bozanic headed wide in stoppage time.

Ex-Everton star Cahill was deputising as captain after Crystal Palace midfielder Mile Jedinak, recently appointed to the role, suffered a groin strain in the final game of the English Premier League season.

Neither Preston defender Bailey Wright nor Swindon midfielder Massimo Luongo, both included in Postecoglou's initial 30-man squad, came off the bench ahead of the announcement of their 23-strong final squad on 2 June.