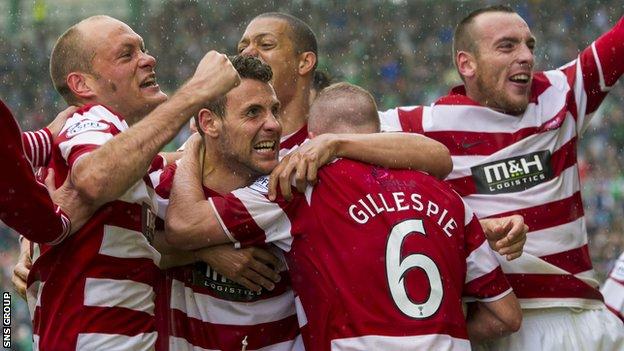 Chairman Les Gray does not expect Hamilton's approach to alter significantly after winning promotion to the Premiership.

Accies will return to the top flight for the first time since 2011 after beating Hibs in the play-off final.

"It means everything to us," Gray told BBC Radio Scotland. "It's what we're about and it gives us the chance to play our young boys at the top level.

"The money is nice but it doesn't really change much."

Hamilton can expect to earn another £1m over the course of next season, with increased prize money and television revenue.

"It's not really about finances for us," added Gray. "It's probably in excess of seven figures extra to us.

"From our perspective it's about our youth policy and being able to sustain that within a business model."

In recent seasons, players such as James McCarthy, James McArthur and Brian Easton have come through the ranks at New Douglas Park, while more than half of the current first-team squad were developed by the Lanarkshire club.

Veterans Jason Scotland and Martin Canning add experience to a youthful pool of players, while Tony Andreu and Jesus Garcia Tena have impressed after arriving from Livingston.

Gray, who used to run the club's youth programme, is to discuss a budget with manager Alex Neil on Monday, with a view to emulating Ross County and Partick Thistle, who have managed to retain their top flight status following promotions.

"No doubt Alex will want to strengthen the team but I also think, knowing how focused and driven he is, that he'll want to give the boys that have got him there a chance," he said.

"We had a plan A and a plan B, which was the Premiership. We haven't really broached that subject before and we'll see where that takes us.

"Incredibly, we're looking up the way, not at Rangers, Hearts and Hibs but at Partick Thistle, Ross County and Inverness. I never thought I would say these words."