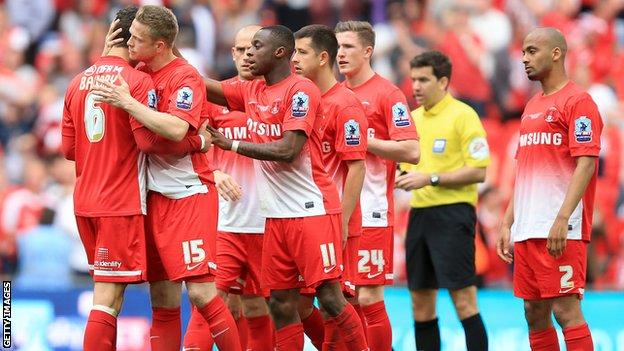 Boss Russell Slade hopes Leyton Orient can come back stronger after losing in the League One play-off final.

The O's were beaten 4-3 on penalties by Rotherham on Sunday following a 2-2 draw after extra time at Wembley.

"At some stage we will sit down, reflect and see what we could have done better and we will go again," he told BBC London 94.9.

"We can look at what we require to make that extra step which gives us that bit more to get us over the line."

Moses Odubajo and Dean Cox had put Orient 2-0 ahead at half-time but Alex Revell twice hit back for the Millers after the break.

We need to look at what Brentford did last season, where they bounced back after missing out in the play-off final against Yeovil

The east London side lead 3-2 in the penalty shoot-out but Mathieu Baudry and Chris Dagnall saw their spot-kicks saved by Rotherham keeper Adam Collin.

Slade has now lost two play-off finals at this level, having been beaten by Blackpool while in charge of Yeovil in 2007.

"It is probably one of toughest moments for me as a manager and it is very tough on the players, who have given everything again for the cause," said the 53-year-old.

"You have to give Rotherham credit for coming back from 2-0 down in a game like that.

"It was always going to be a tough game and unfortunately we've not managed to make it."

Orient began the season with a club-record eight successive wins and challenged for automatic promotion for most of the campaign but finished third.

Having come so close to a place in the Championship, Slade wants his players learn from cross-capital rivals Brentford, who lost in the play-off final last term but went up automatically this season.

"It has been a wonderful journey from day one and it is a pleasure to work with these players," added Slade.

"We need to look at what Brentford did last season, where they bounced back after missing out in the play-off final against Yeovil.

"We need to use that as a model, make sure we react in the right way and come back and see if we can do it next year."