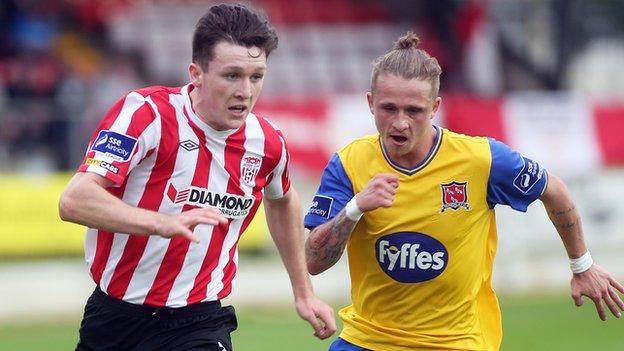 Derry City's interest in the EA Sports Cup ended on Tuesday night as they were beaten by Premier Division leaders Dundalk at the Brandywell.

David McMillan fired Stephen Kenny's men into the lead in the 24th minute with a cracking shot from the edge of the penalty area.

Dundalk substitute Kurtis Byrne made it 2-0 on 74 minutes, finishing well after Danny Ventre had lost possession.

Patrick McEleney scored for City with a superb shot from distance.

That came with six minutes on the clock and gave Peter Hutton's side hope of forcing extra-time.

Derry finished with just nine men on the pitch as keeper Ciaran Gallagher and team-mate Aaron Barry had to go off injured after a clash of heads in stoppage-time.

The hosts had already used their three substitutes and defender Dean Jarvis went into goals for the last few minutes.

Derry are back in Premier Division action on Friday night when they travel to take on champions St Patrick's Athletic at Richmond Park.