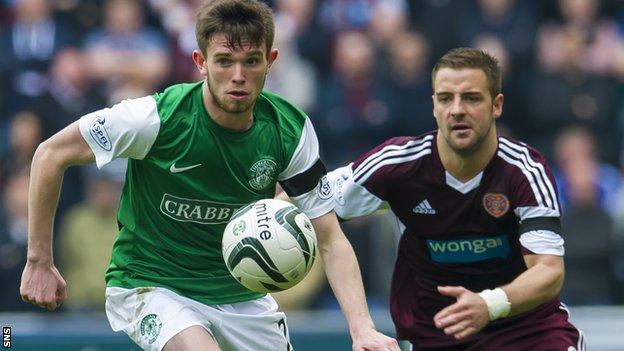 The pair, who suffered relegation from the Premiership with Hibs, were due to meet up with the rest of the squad for the European Championship qualifier.

Stark, however, felt the 20-year-olds would not be in the right state of mind for the match at St Mirren Park.

"The lads are in a state of shock," said the manager.

"Some fans might think players don't care what happens, but they were distraught when I spoke to them last night.

"They felt humiliated and I just felt it would be very difficult for them to come here with a spring in their step and a smile on their face.

"The squad needs positivity around it so I made the decision with the lads' full backing that they should stay at home.

"I told them that if they thought the best thing for them would be to come here and get away from it all, then they were more than welcome.

"But they agreed with me that the state they were in, that would be difficult."

Hibs dropped out of Scotland's top flight on Sunday after losing a penalty shoot-out against Hamilton Academical at Easter Road.

Accies were 2-0 down from the first leg but won by the same score in the return to take the game to extra-time.

And despite the trauma of suffering relegation, Stark says Handling and Stanton will bounce back.

"I told them during my chat that as a good professional, you need to learn to deal with disappointment," he said.

"I can't imagine they will have any greater disappointment than getting relegated with Hibs because it is a big club. No-one would have seen it coming three months ago.

"It's a shock but they will recover and it will not stunt their development."

Scotland sit fourth in Group Three, six points adrift of leaders Slovakia, going into the date with the Dutch.