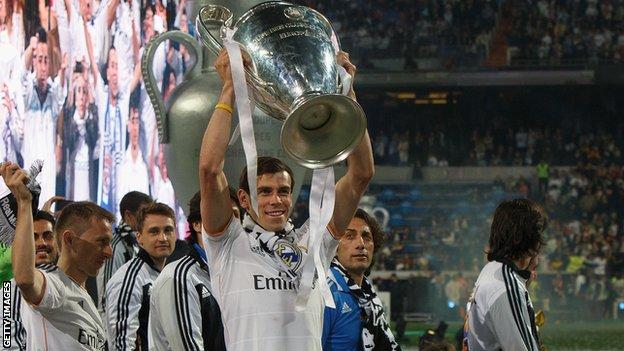 The 10th title, La Decima, was expected to follow swiftly, but Real had to wait 12 years for their next triumph - and more than a decade of drought seemed an age for a club whose history is soaked in success.

What Bale could not possibly have envisaged from his living room in 2002 was that he would be the man to break the barren spell, the next to score the clinching goal for Real in a European Cup final.

Yet that is how events unfolded in Lisbon on Saturday night. Roles were reversed as a watching Zidane - now Real's assistant coach - leapt from the dugout and joined the melee of Real players to mob their saviour Bale.

It was the protégé who brought joy to the master.

"When you're a little boy, you dream of lifting the Champions League," said Bale. "And to lift the 10th one for Real Madrid is special. It's one that will go down in history."

Hero worship for the Welshman scaled stratospheric heights the following evening, as Bale and his team-mates paraded the Champions League trophy on a citywide tour that culminated with a spectacular festival of celebration at the Santiago Bernabeu.

Real's home ground is one of the largest and most iconic in Europe and, with around 80,000 fans packed into its steep, towering stands, the grand old arena rumbled with an atmosphere most venues would struggle to replicate on a matchday.

The singing was incessant, the fireworks explosive and the sheer noise of the occasion unrelenting.

It was the second night in succession the Bernabeu had been full without a match actually taking place on its pitch.

The Madridistas had watched the Champions League final on a four-sided giant screen perched on the halfway line on Saturday, and they returned to the stadium in vast swathes 24 hours later.

As they had done in the final itself, Real's players left it late. Supporters had been chanting and singing for more than 90 minutes before the players emerged, clad in full kit and sporting club scarves and banners.

Each squad member was introduced to the crowd individually, their first names read by the compere and their surnames bellowed by the Bernabeu faithful.

With the players welcomed to the pitch in descending order of squad number, a tingle of anticipation swept around the stadium as supporters prepared to pay tribute to the protagonists most pivotal to their triumph.

The man with number 11 on his back stood on the touchline and took a deep breath.

It was the moment Bale had dreamed about as a boy, the culmination of all those hours spent obsessively honing his skills or sat gazing at the Zidane posters on his wall.

When the name "Gareth" boomed from the speakers, the crowd's cry of "Bale" shook the Bernabeu to its foundations - this was the day of destiny for the man who delivered La Decima.

The volume remained at deafening levels for the likes of Cristiano Ronaldo, Sergio Ramos and Iker Casillas - already established as Real demi-gods - but it was the ceremonial ordaining of Bale that most seemed to grip the Bernabeu.

When the squad gathered on top of the big screen to lift the trophy, the outpouring of relief and pride at La Decima's overdue arrival was so profound that being seated among these supporters felt like joining religious disciples for the final stages of a pilgrimage.

As the confetti settled on the turf and the players' families joined them on the pitch, Ancelotti took a moment to consider Bale's first season in the Spanish capital.

With 17 assists and 22 goals - two of which were decisive strikes in cup finals - Bale has convinced Real that he was worth the world-record £85m fee they paid Tottenham last summer.

And as Bale considers how he can retain, or even enhance, his hero status for the next season, Ancelotti's verdict is one to worry Real's opponents: "All season Gareth has been good and he will be better next year."