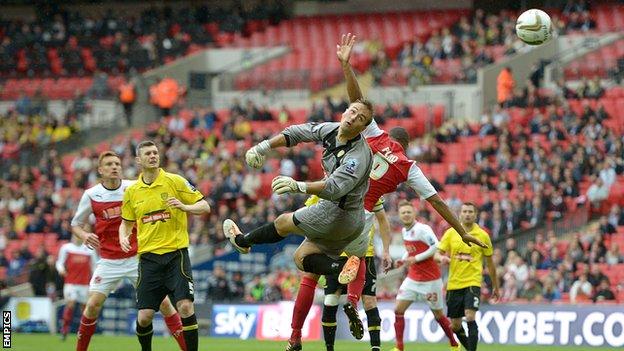 Burton boss Gary Rowett has backed keeper Dean Lyness to recover from his mistake in their League Two play-off final defeat by Fleetwood at Wembley.

Lyness was off his line as Antoni Sarcevic's free-kick found the back of the net to give the Cod Army a 1-0 win.

"I can't be disappointed with him," Rowett told BBC Sport. "He's got to learn from it and become better for it.

"In a lot of the games over the past few weeks often a mistake dictates the result and defines a close game."

Rowett added: "If it wasn't for him then someone else on one of the sides would have possibly made the mistake.

Last night Billy Kee was at the hotel and had to go home to tend to his pregnant wife and probably had about two hours' sleep. Again it typified the spirit we've had all season

"He's been excellent. His handling has been really, really good today.

"He made one or two saves early on in the game when perhaps we were a little bit nervous."

Rowett said he was pleased with his side's efforts in a season which has seen them finish sixth and end up just one win from reaching League One for the first time in the Brewers' history.

"If we had managed to win today it would have been an incredible triumph over adversity," he added.

"Last night Billy Kee was at the hotel and had to go home to tend to his pregnant wife and probably had about two hours' sleep. Again it typified the spirit we've had all season.

"It's been a very difficult and challenging season, probably much harder than last year but we've come back stronger and ended with a great day for the fans and everyone involved in the club."

And Rowett says he is now hoping a few changes this summer will lead to Burton claiming a top-three spot in 2014-2015.

"As soon as the final whistle went, flashing through my mind was 'what can we do to become better?'," he added.

"I think we'll have another excellent season next year.

"We'll have enough with what we bring in the summer. What we've got to do is look at the players that will leave and see if we can bring in some better players that can perhaps give us one or two of the elements that maybe have stopped us going up automatically this season."