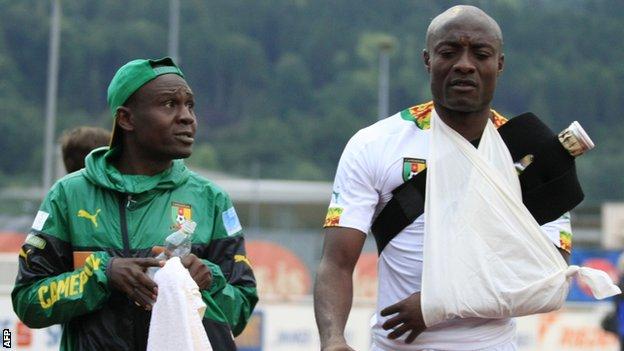 Cameroon captain Samuel Eto'o was rested as his side's injury problems mounted ahead of the World Cup during the win against Macedonia in Austria.

The Chelsea striker was not risked because of a recurrent knee issue and Cameroon saw another experienced striker forced off injured on Monday.

Pierre Webo, 32, injured his shoulder as he gave Cameroon the lead with an overhead kick and had to be replaced.

Eric Maxim Choupo-Moting added a second for Cameroon late on.

The Mainz striker took advantage of some poor Macedonian defending to finish well inside the area.

The match was played despite some disagreement between the players and Cameroon Football Federation officials over how much money they earn from sponsorship deals. Talks between players and officials ended in deadlock over the weekend.

They begin their World Cup campaign against Mexico on 13 June in Natal but have further warm-up games against Paraguay, Germany and Moldova before then.