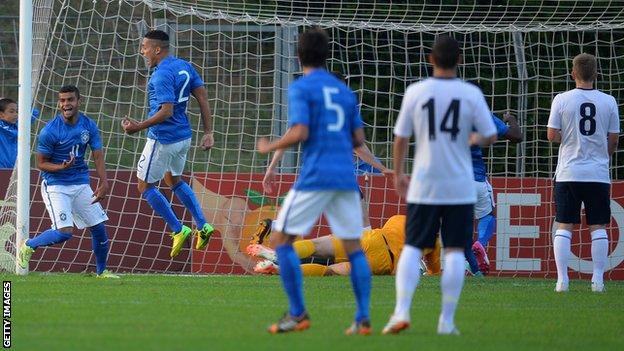 England's Under-20 side face a struggle to reach the final of the Toulon Tournament after suffering a 2-1 defeat against Brazil on Monday.

Gareth Southgate's side fell behind after a defensive mix-up allowed Alisson to score, before Lucas Silva drilled home Brazil's second.

But they could not force an equaliser and are third in Group B with three points, six behind leaders Brazil.

England had beaten Qatar 3-0 in their opening game in the five-team group on 22 May.

But they must win their two remaining matches - against second-placed South Korea on Wednesday and bottom club Colombia on Friday - to stand any chance of reaching the final on 1 June.

Even then they must hope Brazil, who have won all three group games, lose their final game against Qatar on 30 May.

England made the worst possible start against Brazil - Alisson slotting home in the eighth minute after keeper Jack Butland, who was captaining the side, had been slow off his line.

Norwich winger Nathan Redmond forced a fine save from Marcos before Silva took advantage of a stray pass from Liam Moore, after a cruel bobble off the pitch, to make it 2-0 in the 47th minute.

England at the Toulon Tournament

England did reduce the deficit - Ward-Prowse finding the net with a delightful curling set-piece from 20 yards in the 71st minute - but they ran out of time.

Southgate's side can still reach the third-place play-off but need to win their next two games to stand a chance.

"It's disappointing because we feel we were equal to Brazil," said Southgate.

"One or two players showed nerves but the biggest disappointment was the goals we conceded."