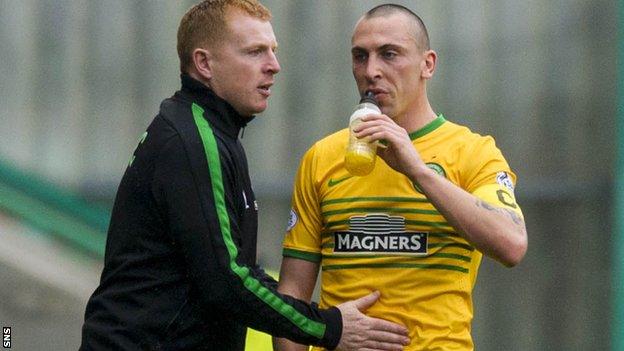 Celtic captain Scott Brown admits he was shocked to hear manager Neil Lennon had decided to leave the Scottish champions.

Lennon quit after winning his third straight league title, and Brown says the Northern Irishman played a huge part in his development as a player.

"Yes, of course I was surprised," Brown said. "But we wish him all the best, he's been fantastic for the club.

Brown confirmed he had spoken to Lennon since his Celtic exit was announced, but said he had no idea about the reasons behind his former manager's decision.

"I don't know about that, we didn't go into too much detail," Brown added.

We just have to respect his decision. Being an ex-manager you can understand decisions

"Since he first came in as caretaker [in 2010], he wanted to attack and play good football, and he continued that all the way through.

"He's a great manager and is going to be a hard act to follow, but I've got faith in whoever comes in, whoever the board picks.

Scotland manager Gordon Strachan, who was in charge of Celtic from 2005-2009 and hired Lennon as a coach during his tenure, said of the 42-year-old's departure: "We just have to respect his decision.

"Being an ex-manager you can understand decisions, I've been in the game that long.

"I'm sure I'll bump into Neil over the next couple of months and we'll have a chat. Until then, there's nothing much I can say. If Lenny wants a break from football, I'll give him it by not talking about him."