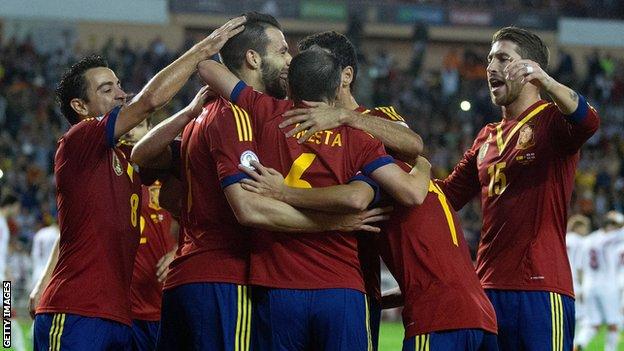 BBC Sport sorts through all the highlights of the World Cup qualifiers, as the 2014 tournament in Brazil draws nearer.

Watch the best goals, the classic matches, the worst gaffes and the strangest moments as 203 teams sought to be amongst the 32 finalists.

Luis Suarez and Robin van Persie finished the qualifying campaign with 11 goals each, making them the joint top scorers of the 32 teams that reached the World Cup finals.

Uruguay's Suarez scored nearly half of his country's goals in qualifying as they secured their spot via a play-off with Jordan, while Van Persie's goals helped Netherlands finish top of their group with a +29 goal difference.

Whet your appetite ahead of the World Cup by watching some of the best strikes from the qualifiers.

The video starts with a sensational hit from Juan Carlos Marino, a 30-yard drive which helped Peru earn a point against Bolivia.

Other highlights include Serbia's Aleksandar Kolarov's superb goal against Wales and an overhead kick from Juan Carlos Garcia for Honduras.

Wales' Gareth Bale's stunner against Serbia features in our top 10 free-kicks from the qualifiers, as does Argentine Lionel Messi's low drive against Uruguay.

Our top team goals from qualifying showcases a 16-pass move from Slovenia in the build-up to Jasmin Kurtic's strike and some classic football from Spain leading to a Jordi Alba finish.

We then finish with a screamer from Hallur Hansson of the Faroe Islands.

Yura Movsisyan scored twice against Denmark - the first in 27 seconds - the quickest goal scored in qualifying for the 2014 World Cup - and in Armenian national team history.

Armenia finished Group B in fifth place, nine points behind Italy, who qualified along with Denmark.

We pick out some of the mores embarrassing moments for players during qualification.

Armenia's Araz Ozbiliz features as he somehow manages to kick the corner flag rather than the ball, Jamaica's Alvas Powell gets himself into a spot of trouble with a throw-in while Portugal goalkeeper Rui Patricio plays his way into trouble.

The strange and unusual

Watch some of the more odd moments from the global qualifying campaign.

The moments revisited include Scotland kicking off the second half of their game in Macedonia before the home goalkeeper Tome Pacovski made it back onto the pitch, and some incredible weather as USA hosted Costa Rica in snow-hit Colorado.

Argentina's Javier Mascherano red card for kicking out in Ecuador, and Italy's Mario Balotelli's furious outburst after being sent off against the Czech Republic are also included.

Finally we see some Poland fans making the most of soggy conditions in Warsaw before their team's qualifier with England, a game that eventually had to be rescheduled because of the waterlogged pitch.

An eight-goal thriller between Sweden and Germany in qualifying for the finals saw the Germans come from behind to win 5-3 in Solna.

Tobias Hysen scored his first of a brace early on for Sweden, before Alexander Kacaniklic made it two, then Mesut Ozil and substitute Mario Gotze scored either side of the break and a fine hat-trick from Andre Schurrle capped off the win for Germany.

The Germans qualified top of their group, with Sweden losing out to Portugal in a play-off.

Iceland came back from a 4-1 second-half deficit to steal a dramatic point away to Switzerland.

The hosts looked to be cruising to victory, but were undone by Johann Gudmundsson's hat-trick and sensational added-time equaliser.

Despite the setback, Switzerland still topped their group and will be one of the seeded teams at this year's World Cup, while Iceland finished second but were bundled out in the play-offs.

Colombia produced a fantastic comeback against Chile, in a match that ended 3-3, and qualified for the finals - the first time they have reached a World Cup since France 1998.

They kick off their World Cup campaign against Greece on Saturday, 14 June.

Panama scored first through Gabriel Torres before Michael Orozco equalised for the US, Luis Tejada then put the hosts ahead again before Graham Zusi and Aron Johannsson scored in the 91st and 92nd minute respectively.

Had Panama held onto the lead they would have finished above Mexico in the qualifying group on goals scored.

Cristiano Ronaldo starred in one of the best games of the qualifiers - Portugal's 3-2 second-leg play-off win in Sweden.

Portugal headed to Solna with a 1-0 aggregate lead, in a tie that pitted superstars Ronaldo and Zlatan Ibrahimovic against each other for a spot at the World Cup.

The match-up lived up to the hype in the second half, after the Portuguese star added to his first-leg goal, Ibrahimovic gave Sweden hope with two goals in four minutes.

But Ronaldo added a quickfire double of his own to finish with a hat-trick for the match and book his country's ticket to Brazil.

Along with those who battled through qualifying, Brazil made it to the World Cup finals automatically as hosts.

Barcelona's Neymar, Chelsea trio Oscar, Ramires and David Luiz as well as Tottenham's Paulinho could all feature in Luiz Felipe Scolari's side when they kick off against Croatia on 12 June.

Each side came through a group stage before winning a play-off to travel to Brazil.

Iran had to get through three rounds of qualifying, while the three others had to triumph in two rounds.

Thirteen European teams have qualified for the World Cup finals.

Croatia, France, Greece and Portugal all had to come through the play-offs.

The United States, Costa Rica and Honduras made it through three rounds of qualifying to reach the World Cup finals.