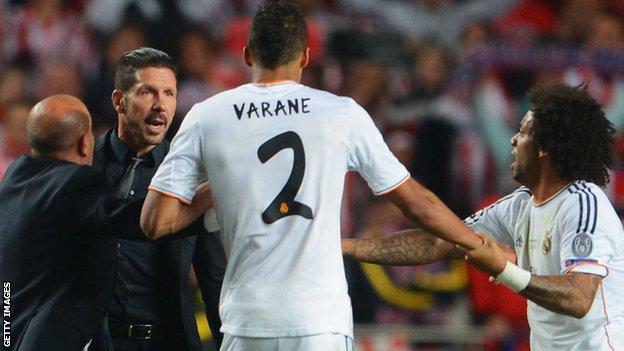 Atletico Madrid manager Diego Simeone has been charged with improper conduct by Uefa after storming onto the pitch during the Champions League final.

The Argentine twice came on to the pitch during his side's 4-1 defeat by Real Madrid in Lisbon.

Simeone, 42, was sent off by Dutch referee Bjorn Kuipers.

Real midfielder Xabi Alonso, who was suspended, has also been charged after sprinting down the touchline in celebration at the final whistle.

Uefa has charged both clubs for receiving at least five yellow cards. They also face additional fines for fans lighting fireworks inside the stadium.

Real picked up five bookings, while seven of Atletico's starting XI were cautioned.

All cases will be deal with at disciplinary hearings on 17 July and Simeone and Alonso could face suspensions for next season's competition.