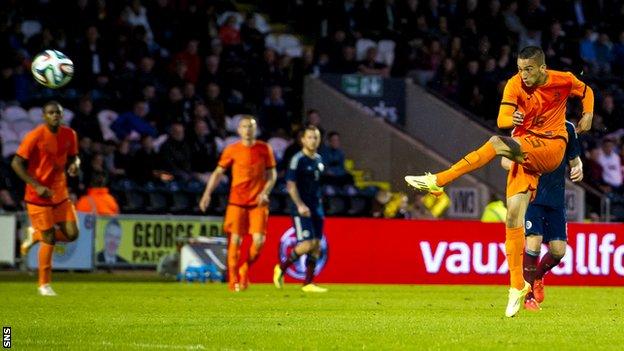 A first-half hat-trick by FC Twente winger Quincy Promes gave the Dutch a healthy lead at the break.

Karim Rekik made it four before a double by Hakim Ziyech further emphasised the visitors' dominance.

Stevie May pulled one back for Billy Stark's side, who are second bottom of Group 3 with two games remaining.

The Netherlands move top of the section, leading Slovakia on goal difference having played a game more.

Group winners and the four best runners-up will progress to the play-offs, from which seven teams will join hosts Czech Republic in the finals.

Stark indicated before the Netherlands' visit to St Mirren Park that three wins would probably be required for Scotland to reach next year's tournament.

And though they started well with Stuart Armstrong and Callum McGregor going close, the Dutch soon took command.

Promes was given too much space at the edge of the box and drilled a left-footed shot past Jordan Archer.

The forward burrowed his way through the Scottish defence to drive home his second and Promes completed his treble after racing on to Marco van Ginkel's pass.

Manchester City defender Rekik slammed a shot in off the bar five minutes into the second half after Van Ginkel's header had been cleared off the line.

And a wonderful strike from distance by Ziyech was followed by a volley from the substitute to take the Dutch tally to six.

May's low drive from the edge of the box at least gave the 3,000-strong crowd something to cheer on a miserable night for the Scots.