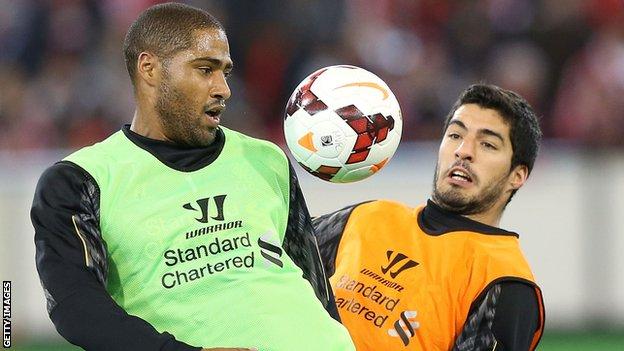 England defender Glen Johnson says Liverpool team-mate and Uruguay striker Luis Suarez has told him he will be fit for the World Cup game between their two countries on 19 June.

Suarez, 27, is a doubt for the Group D match after undergoing a knee operation last Thursday, with his recovery expected to take 15 days to four weeks.

"I spoke to him in the week," said 29-year-old right-back Johnson.

"He doesn't think that it is that bad so he thinks he will be OK."

Suarez was the Premier League's leading scorer with 31 goals this season, despite missing the opening five matches through suspension.

"On a personal level I don't want to see him injured," added Johnson.

"He is a good lad and I get on well with him and, of course, I don't want him to be injured.

"But we just have to focus on ourselves and let everybody else worry about the other teams."

England play Peru at Wembley on Friday before setting off for Miami to face Ecuador on 4 June and Honduras three days later ahead of their World Cup opener against Italy on 14 June.

Midfielder Jack Wilshere has only recently returned from a foot injury which sidelined him from March and will be hoping to use those warm-up games to build up his fitness.

"I am at the stage now where I just need a few games," he said. "I've been training for six weeks.

"I've had the last 30 minutes at Norwich and last 15 at Wembley in the FA Cup final.

"I'm feeling good and desperate to get out there now."