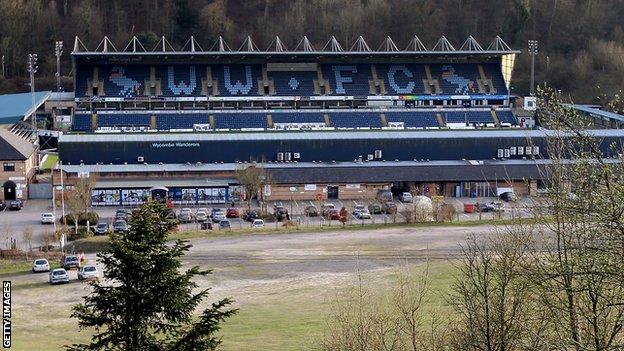 Bristol Rovers have said their legal bid against Wycombe is based on evidence given in a hearing that resulted in the banning of an agent.

In a letter,Rovers say that a deal by Wycombe to use sell-on clause money to pay a debt to former owner Steve Hayes constitutes third-party ownership.

Wanderers say they believe they have no case to answer.

The two clubs finished the League Two season level on points, but Rovers were relegated to the Conference Premier on goal difference and believe the Chairboys' alleged conduct put them at a competitive disadvantage.

Last week Wycombe, now owned by the Wycombe Supporters' Trust, were found guilty of agreeing to pay Smith for his services through a future sell-on clause of winger Matt Phillips, an arrangement set up by the previous ownership.

Smith denied agreeing to receive payments in such a way, but was banned for two years, 18 months of which was suspended, and can appeal against the punishment.

Phillips joined Blackpool for £325,000 from Wycombe in 2010 and moved to QPR last year, which is when the Chairboys' current owners became aware of the offence and alerted the Football Association and Football League.

During the subsequent court case in April it became apparent that the sell-on money from Phillips, and any future sale of Jordan Ibe, who joined Liverpool in 2012, had been designated to pay off debt owed to Hayes.

Wycombe believe that this does not constitute third-party ownership and, because the arrangement was outlined in the takeover documentation two years ago, was made clear to the authorities.

To further complicate matters, Wycombe sold their right to a sell-on fee for Phillips to Blackpool for £200,000 before the midfielder was moved on to QPR, a payment which Hayes received.

Bristol Rovers, as outlined in the letter made public on their website, believe Hayes's continued interest in the players can be defined as third-party ownership.

The Pirates say that the matter should have been investigated when it came to light and, had Wycombe been found guilty, could have suffered a transfer embargo and possibly a points deduction.