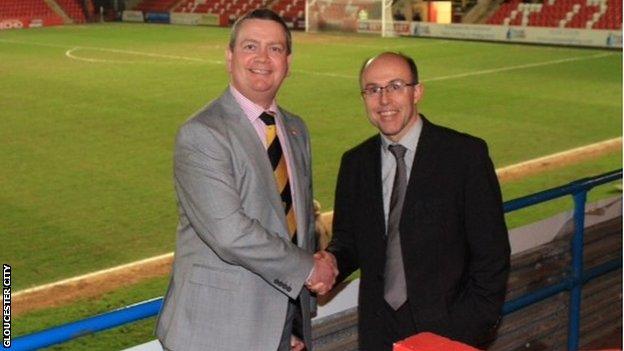 Gloucester City chairman Stuart Pike has stepped down after only five months in the role.

Local businessman Pike was previously in the position for a short period in 2006 but left to concentrate on his work with the Royal Air Force.

He then returned to the Conference North side in December, succeeding long-term chairman Nigel Hughes.

Vice-chairman and lifelong supporter Mike Dunstan will now step up to take the role in an acting capacity.

Gloucester have been without a permanent home since 2007, after their Meadow Park ground was destroyed by flooding.

After several years of set-backs, plans are now in motion to rebuild the stadium at its original location.

And in a statement, departing Pike said: "When I agreed to take over as chairman from Nigel Hughes it was always my intention to stand aside once the plans for the new ground were submitted to the Council, and that is now imminent.

"That will spark a huge surge in work to develop the off-field commercial and community operations to maximise the benefits the stadium will deliver.

"It is my belief that the interests of the club would be better served by someone that can really drive those activities as the club comes home."