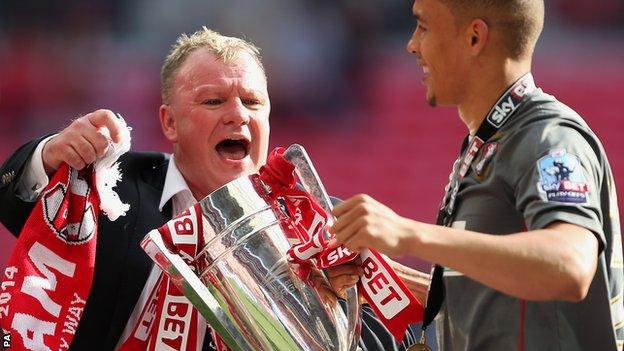 The 51-year-old Scot left Crawley Town in April 2012 to become Millers boss and, in his first full season, led them to runners-up spot in League Two.

He followed that with a fourth-placed finish in the third tier and sealed a spot in the Championship with play-off final victory over Leyton Orient.

"I always believed we could win back-to-back promotions to the Championship from the moment I walked in.

"The new contract genuinely took two minutes in terms of the detail within it for me to say 'yes'."

Evans has now been involved in four consecutive promotions with first Crawley and now Rotherham and is looking to achieve further success.

"The first thing we need to do is land in the Championship and get used to being at that level. We need to respect what it's about and we know that some weeks when we go to a big club with high-salaried players that if they click we're going to be in the trenches.

"We're not going to adapt our style. We're going to do exactly what we've done for two years. We're going to get into people's faces, fight and scrap for every ball and try and win enough of the battles so that our talented players can get the ball at their feet and bring their ability into play."

On Wednesday, Rotherham released seven players as they announced their retained list for next season.

A sometimes controversial figure, Evans was born in Glasgow and played at Bolton Wanderers, Clyde, St Johnstone and Ayr United before beginning his managerial career at Stamford, in the United Counties Football League.

In 2006, he received a one-year prison sentence, suspended for two years, for defrauding the Inland Revenue after admitting disguising wages and bonuses as expenses between 1997 and 2002 while manager of Boston United.

The five-year scam resulted in £323,000 in taxes being withheld during a time in which Boston were promoted from the Unibond League to the Nationwide Conference and then the Football League.

Evans took over at Crawley in May 2007 and, in April 2011, guided the Sussex club into the Football League.