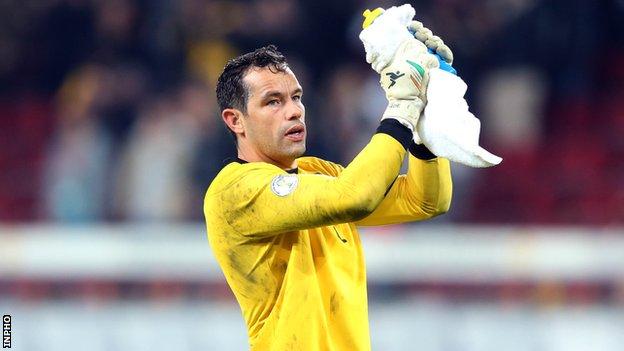 David Forde is hoping for a repeat of his Republic of Ireland debut when Martin O'Neill's side face Italy at Craven Cottage on Saturday night.

Forde's first cap three years ago saw an under-strength Republic side earn a surprise 2-0 win over Italy in Liege.

Italy included stars such as Andrea Pirlo but goals from Keith Andrews and Simon Cox ensured an Irish victory.

"It was a bizarre night, it was a fantastic night," recalled Millwall keeper Forde, 34.

"If we had another one of those nights, I'd be delighted."

Three years on, Forde has brought his caps haul up to 16 and he is now established as Martin O'Neill's regular number one.

The Galway man is looking forward to renewing hostilities with the Italians after he missed out on the 2-0 defeat by the Azzurri at the Euro 2012 finals.

"We are a good underdog and I am sure we will put in a good performance on Saturday."

The Republic go into Saturday's game in London on the back of successive defeats against Serbia and Turkey.

However, O'Neill's side wasted glorious opportunities in both games and Forde believes that there is no need for any panic.

"It's not nice being beaten and we want to start winning games and turning them around," added the keeper.

"The last couple of games now, we have come in and said we should have taken our chances and we should have been comfortable in games where we have left the door open and allowed teams in, and you get punished at this level.

"There are still a lot of positives there and the main target and the main aim is [the first Euro 2016 qualifier] Georgia in September."

Forde looks certain to return between the posts after Newcastle keeper Rob Elliot earned his first cap in Sunday's defeat by the Turks.

With Elliot unavailable for Saturday's game because he is getting married this weekend, Manchester City teenage keeper Ian Lawlor and Coventry custodian Joe Murphy have been drafted into the Republic squad.

Elliot will return to the squad for the games in the USA against Costa Rica and Portugal.