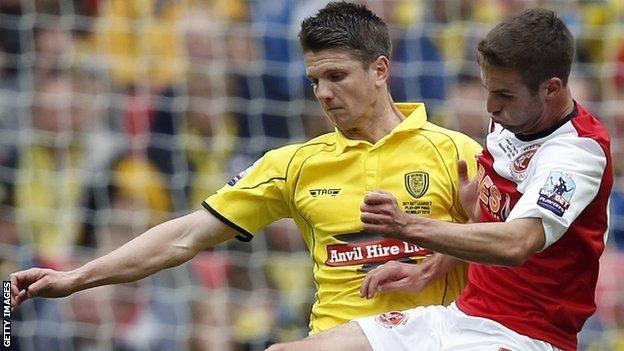 Centre-half Shane Cansdell-Sherriff has signed a two-year deal at Burton Albion after his Preston contract expired.

The 31-year-old Australian was a key figure after joining on loan last season, playing 36 games as the club reached the League Two play-off final.

Manager Gary Rowett said: "He was a big asset last season and played a big part in our excellent defensive record."

Strikers Symes, 30, and Alexander, 34, defenders Gray, 26, and Diamond, 28, midfielder Dyer, 22, along with goalkeeper Hall, 29, were all out of contract and have not been offered new deals.

Rowett was pleased to see the squad taking shape already.

He said: "We've tried to get as much done as early as we can in terms of signings for next season.

"We now have most of the core of the team already wrapped up, which is what you want.

"Shane has played at League One level before and he's the kind of player that will help us make the step up."