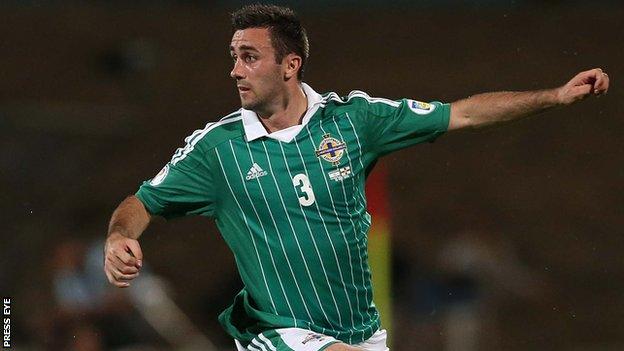 Lafferty, 26, looks certain to play for a depleted Irish side against Uruguay in the early hours of Saturday morning.

"They're going to the World Cup and they're going all out to prepare for that," said the Derryman.

"It will be a phenomenal experience and one I was never going to pull out of."

Michael O'Neill's side take on Uruguay in Montevideo pitting Lafferty and company against a side missing the injured Luis Suarez but led by Paris St Germain star Edinson Cavani.

Then on 4 June, the Northern Irish will face a Chile side that are likely to include Barcelona star Alexis Sanchez.

Both South American countries will use the games against Northern Ireland as part of their World Cup preparations and Lafferty is eager to meet the challenges head on.

"Where do you start with teams like Uruguay and Chile?

"No matter what side they put out they possess unbelievable quality and they draw their players from the top clubs throughout Europe and South America," he said.

"It's a massive opportunity, maybe a once-in-a-career chance."

When Lafferty does head back to Turf Moor it will be with a new three-year contract following the Clarets' unexpected promotion last term.

The left-back has made only 12 first-team appearances for his club - and none since January - but has still been handed a new deal by manager Sean Dyche.

For a player who was playing with Derry City in the League of Ireland as recently as January 2012, it completes an impressive rise for the full-back.

"I'm not sure if the reality of playing in the Premier League has fully sunk in yet," he said.

"I'll be pinching myself when I do. To walk out at Old Trafford or Anfield would be unbelievable considering where I was three years ago.

"It's very exciting for me to have signed a new contract and I'm quite flattered by it to be honest.

"I didn't play as much as I'd like this season, and only about 40 times since I've been at the club, so for the manager to turn around and give me three years, as a player with no Premier League experience, was a boost."