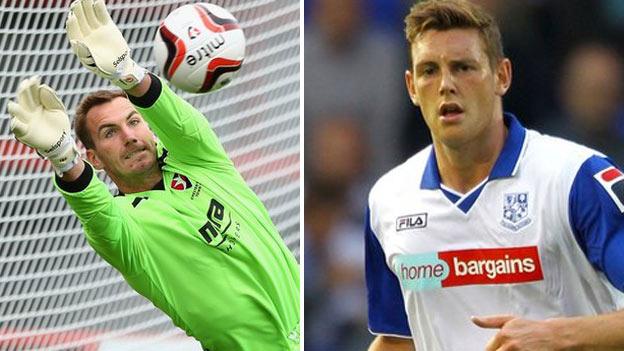 Former Wales Under-21 international Taylor, 23, also turned down an offer from relegated Tranmere.

The Dons have already signed Shaleum Logan from Brentford and manager Derek McInnes said: "We will look to bring in one or two others."

McInnes is preparing for the early qualifying rounds of the Europa League after his side finishing third in the Scottish Premiership.

"Both players, alongside Shay Logan, bring a level of experience and ability that will hopefully improve us as a club," he told the Dons website.

"I'm delighted we've been able to sign three key players that we had targeted."

Scott is highly regarded. We watched him the whole of last season and we feel we've got a more than capable goalkeeper

Wirral-born Taylor came through the youth ranks at Tranmere and made 47 appearances this season in League One.

"He got a great presence and he's at a great age," he said. "He's only 23 but has already played 200 games in League One in England and he's a player we think we can work with and improve.

"We faced significant competition from Championship clubs and I am delighted that Ash sees Aberdeen as the right move for his career."

Brown began his career with his locals club, Wolverhampton Wanderers, and had a spell with Welshpool Town before a return to English football with Bristol City.

However, he did not make his Football League debut until joining Cheltenham in 2005.

"He is highly regarded," said McInnes. "We watched him the whole of last season and we feel we've got a more than capable goalkeeper to come in and provide real competition in that area.

"He's got good experience. He's a good age for a goalkeeper and again another one who will get better with us."

Brown, who made 49 appearances this season, was enthused at working with McInnes and goalkeeping coach Jim Leighton.

"It was such a difficult decision for me to take," he told Cheltenham's website.

"I couldn't turn the opportunity down to be involved at a club like Aberdeen and to work with Derek McInnes and Jim Leighton on a full-time basis.

"It's an opportunity that rarely comes around, but Cheltenham Town will always be the result I look out for first and, whenever I am back, I will be watching."