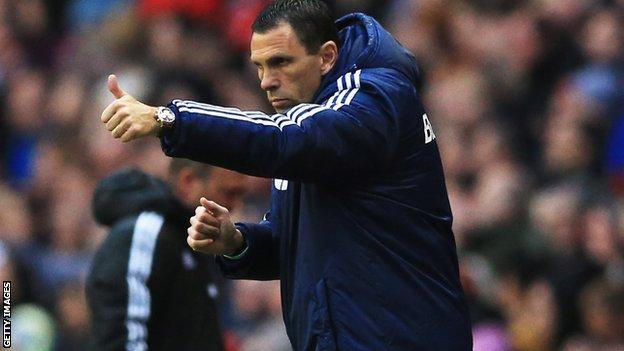 Sunderland boss Gus Poyet has signed a new deal that will keep him at the Stadium of Light until 2016.

Poyet kept the Black Cats in the Premier League with a late run that included four straight wins, and also took them to the League Cup final.

"Stability is absolutely key to long-term and sustained success for any football club," the 46-year-old told the club website.

"This new contract gives both the club and me that stability."

Sunderland were bottom of the table in April and, by Poyet's own estimation, requiring "a miracle" to stay up, before a draw with Manchester City sparked a run of form that confounded expectations.

Victories over Chelsea and Manchester United, as well as fellow strugglers Cardiff and West Brom, saw them climb away from trouble and finish the season in 14th place.

"Now it's a different challenge for me and the club and I am relishing the next stage with Sunderland," added the Uruguayan.

Poyet replaced Paolo Di Canio in October last year after the club had taken just one point from their opening seven games.

He oversaw a season in which the team struggled for consistency in the league but reached their first major cup final in more than two decades.

The former Chelsea and Tottenham midfielder started his coaching career at Swindon and Leeds before moving to Spurs as first-team coach, becoming assistant manager to Juande Ramos.

He was appointed Brighton manager in 2009, leading them to promotion from League One then taking them to the Championship play-offs.

He was suspended by the Seagulls after an internal investigation and later sacked for gross misconduct, although the full reasons for his sacking have never been revealed.