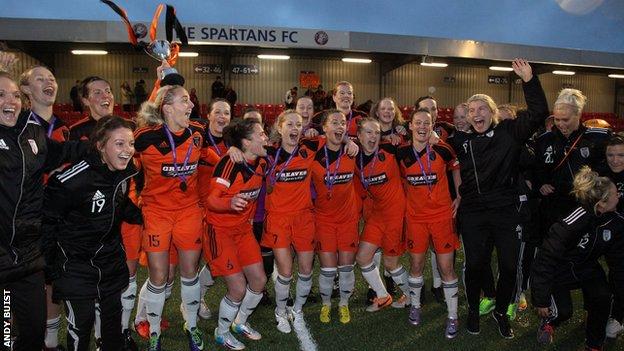 Glasgow City won the Scottish Women's League Cup for the third time in a row with comfortable 3-0 win over Hibernian at Ainslie Park.

The holders were in control but took until the second half to double their advantage, Denise O'Sullivan burying a shot past Hannah Reid.

It is particularly pleasing for the new players, some who have tasted winning a trophy for the first time

Head coach Eddie Wolecki Black said: "We knew there was a chance for us to be the first team to win this trophy three times in a row and that was obviously a huge motivation for us.

"I felt we performed very well on the night, passed the ball with a purpose and always looked a threat.

"Hibs had lost a couple of players in the build up to this game, but we were focused on making sure that never resulted in a dip in our own performance.

"It is particularly pleasing for the new players, some who have tasted winning a trophy for the first time and hopefully they go on to many more after this one.

"Everybody contributes towards success at this club and I would like to go on record and thank everyone for their efforts so far and I am sure they now know that hard work does pay dividends.

"It takes two teams to make a final and I thought Hibs competed very well."