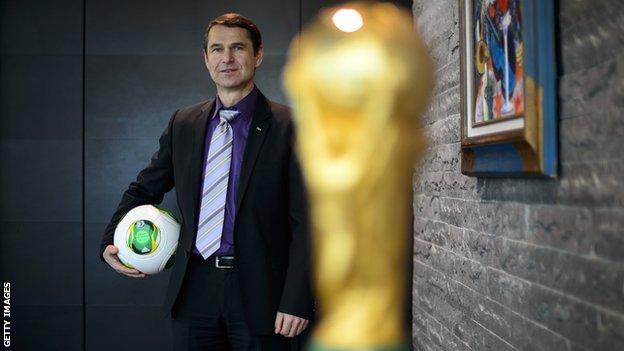 With just a handful of days before the start of the 2014 World Cup in Brazil, claims that fixers targeted Nigeria's warm-up game against Scotland could not have come at a worse time.

Following other recent revelations, football's integrity is already in the spotlight, although the World Cup itself has remained stain-free.

Surely the fixers would shy away from such a high-profile tournament, watched by billions around the planet and with football's governing body on red alert for corruption?

Not so, according to Ralf Mutschke, Fifa's head of security.

The former Interpol executive and police officer says he cannot give the World Cup a clean bill of health and has even identified the matches that carry the greatest risk.

According to Mutschke, the following is all true:

For the last two years, Mutschke and his team have been planning meticulously to prevent World Cup games from falling victim to the fixers.

"We are not expecting fixers to be travelling to Brazil and knocking on the hotel door of players or referees, but I know there will have been approaches to players and referees," he says.

Wilson Raj Perumal, a known fixer who is now in prison in Finland, has admitted in his autobiography to fixing matches in the most recent World Cup qualifiers.

Is he out of the game or will he have associates attempting to rig games in Brazil?

"It is possible," says Fifa's head of security Ralf Mutschke. "You cannot say 'yes' or 'no' definitely, but we are focusing on doing our best to protect the whole tournament rather than what one individual could or could not do."

As part of Mutschke's anti-fixing campaign, each World Cup game will get a rating for potential corruption, determined by intelligence and past history.

"We know warm-up matches were thrown in the last World Cup, so that is also useful information to help us counter things."

Match-fixers are most likely to entice players or referees to influence two betting markets: the Asian handicap and the over-under goals market.

More than 99% of wagers in Asia will be placed on these two markets.

On the Asian handicap, teams are handicapped according to their form, so a stronger team must win by more goals for a bet to be successful.

They go to the player or the ref and offer money to throw the match. If he doesn't agree, they go to the next guy

Gamblers are given the opportunity to bet higher or lower on 2.5 goals, 3.5 goals and so on.

"I would say I am most worried about these two markets," Mutschke said.

"The match result is a possibility, but it is much harder to organise because you need so many players.

"With the Asian handicap or over-under, you may only need the referee or one or two players."

Mutschke and his team intend to speak to every team and match official when they arrive in Brazil for the World Cup, which begins on 12 June.

"We had training sessions with referees in Zurich," he says.

"We are also going to meet them prior to kick off in Rio and we also will visit the team and players for security sessions. We will give them a reminder to report an approach from fixers.

"We'll establish reporting channels for athletes and officials. We'll also be bringing an integrity manager who will coordinate those measures with Fifa's Early Warning System (EWS), which monitors betting patterns."

What happens when those reporting channels bear fruit or, during a match, the EWS alerts investigators to corruption?

"We have an officer in the stadium and he will act on my decision," says Mutschke. "It will depend on the information and the response required.

"He can just monitor the situation regarding players, referees, others. He could approach people during half-time or directly after the game. He also can use technical equipment to identify possible fixers in the stadium."

Mutschke says fixers have become bolder in their attempt to rig contests, making up-front offers to players and officials rather than attempting to groom them over time.

"I've had reports that people are approaching players and offering $20,000 without a grooming period," he says.

"Before, it was all about grooming, getting closer to the target, but we have a lot of records now about cold approaches. They go to the player or ref and offer money to throw a match. If he does not agree, they go to the next guy. This happens very often. It's pretty bold."

Chris Eaton, Mutschke's predecessor at Fifa, believes the threat level at the World Cup to be "low" but says criminals could be tempted by the huge rewards that are potentially on offer.

"It's low because of the size of the event," says Eaton, now head of the International Centre for Sport and Security (ICCS).

"That's a dissuader to fixers. It's easier for them to target minor European leagues or international friendlies.

"Nevertheless, the amount gambled on the World Cup will run into any many billions of dollars and the criminal mindset is one which will not be able to ignore the opportunity."

With the betting market in Asia expected to turn over close to $1bn per match when the action begins, it is not hard to see why.

To put that sum into context, the regulated industry in the United Kingdom expects close to a £1bn bonanza for the whole tournament, making it comfortably the biggest betting event of all time.

Eaton's ICCS recently teamed up with the Sorbonne University in Paris to analyse the anatomy of corruption in sport.

A report released earlier this month estimated that organised crime launders £85bn a year through betting corruption on sport.

It is the sheer weight of money involved that makes it easy for criminals to remain untraceable, according to Dr Andrew Harvey.

For the last two years, he has been working with FifPro, the world player's union, to prevent corruption.

"The high liquidity of the market would make it attractive to fixing as it enables large bets to be hidden more effectively," says Harvey. "That will be attractive to a potential fixer.

"Yes, all matches will be covered by the Fifa EWS betting monitoring system, making it harder to get bets on, but it won't be impossible as the systems cannot monitor betting volumes on the unregulated markets."

Mutschke, Eaton and Harvey may all differ on the threat level to the World Cup, but they agree on one aspect: the tournament may be the pinnacle of a player or referee's career, but it does not mean it will not be fixed.