Malcolm Glazer, the billionaire who led a controversial takeover of Manchester United, has died aged 85.

The Glazer family purchased United for £790m in May 2005 amid protests from the Premier League club's fans.

"Malcolm Glazer never set foot in Old Trafford but was a figurehead of that controversial takeover of Manchester United.

"In terms of practicalities and the day-to-day running of the club, very little will change and the business will continue to be run on the same basis it has been for a number of years.

"The club's debt payments have been reduced, but I think it is fair to say fan anger over those debts remains and will not go away."

However, they went on to win five Premier League titles and the Champions League under his ownership.

The New York-born American's sons, Joel and Avram, took over the day-to-day running of the club after their father suffered a stroke in April 2006.

"The thoughts of everyone at Manchester United are with his family," said a spokesman for the Premier League club.

The club's Dutch striker Robin van Persie, 30, tweeted: "My condolences go out to the Glazer family and friends."

The Glazer family retain a 90% share in United - split equally among Glazer's six children - with 10% listed on the New York Stock Exchange.

Glazer, who never actually set foot inside Old Trafford, gradually bought out United shareholders between 2003 and 2005.

His takeover was largely funded by loans secured against the club's assets, a move that took them heavily into debt and sat uneasily with many fans at Old Trafford.

Manchester United Supporters' Trust vice-chair Sean Bones said: "It would be inappropriate for me to make any comment about the death of Malcolm Glazer as I didn't know him or his family personally.

"However, as a supporter, I am aware of the detrimental effect the Glazers have had on the football club and the huge debt that has been placed on Manchester United."

Supporters' group Shareholders United were one of the most vociferous anti-Glazer voices during the takeover, and in the aftermath.

In 2010, a group of lifelong United fans made up of City bankers and lawyers set up the Red Knights consortium in an attempt to buy the club with the support of fans, but their plans failed.

From family store to billionaire

The club had no debts before the Glazer family takeover but now owe around £400m. Yet, despite a turbulent 2013-14 season which resulted in the sacking of manager David Moyes, United still generate record revenue, with turnover set to exceed £418m in the 2013-14 financial year.

Football finance expert Professor Tom Cannon from the University of Liverpool told BBC Radio 5 live: "He had a massive impact on the club. He loaded them with a lot of debt while at the same time building up their commercial side until it became a global phenomenon, so two very striking differences.

Glazer was also the owner of the Tampa Bay Buccaneers, where he will be remembered much more fondly for turning one of American football's least successful franchises into Super Bowl winners following his takeover in 1995.

Former Buccaneers coach Jon Gruden, who led the team to that Super Bowl triumph, said: "He was a friend and a trailblazer. I'll miss him and I thank him for believing in me. My condolences to the Glazer family and to the Bucs organization."

The Glazers are a very close knit but large family. There's no doubt Malcolm Glazer was the patriarch who led the initiative and in a sense held them together.

One of the concerns now might be whether you get the situation you've seen in the past, even in English football, where you get divided opinions within members of the family - some wanting to sell, to cash in, some wanting to hold on. That's going to be the big question in the short to medium term and of course the next few weeks are crucial for Manchester United and it may be there's a hiatus while they sort out that kind of issue.

NFL commissioner Roger Goodell added: "Malcolm Glazer was the guiding force behind the building of a Super Bowl-champion organisation.

"His dedication to the community was evident in all he did, including his leadership in bringing Super Bowls to Tampa Bay. Malcolm's commitment to the Bucs, the NFL and the people of the Tampa Bay region are the hallmarks of his legacy."

Glazer's business career started when he took over the family watch-parts business aged 15, following the death of his father.

Glazer is survived by his wife Linda, his six children and 14 grandchildren. 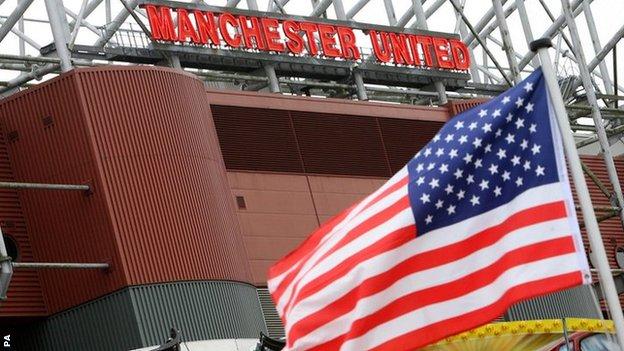