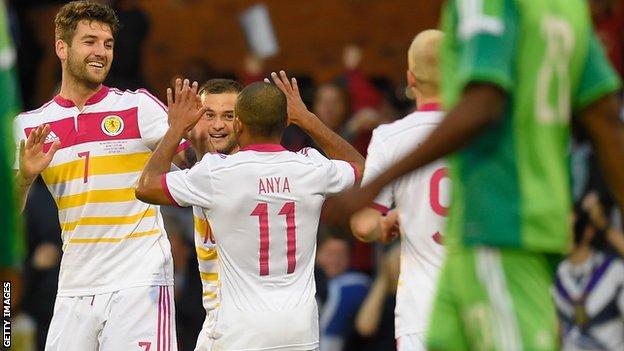 Charlie Mulgrew says there is plenty of room for Scotland to improve on their performance in the 2-2 draw with African champions Nigeria.

The Celtic midfielder scored the opening goal in the friendly at Craven Cottage on Tuesday night.

"There's a lot of positives but we can do better than that," said Mulgrew.

"We passed the ball well at times, but we can pass it even better, which is a good thing because we still got a result."

Mulgrew diverted a James Morrison shot into the net with a neat flick after 10 minutes, but a deflected Michael Uchebo drive made it 1-1 before the break.

Azubuike Egwuekwe's own goal gave Gordon Strachan's side the edge again but Uche Nwofor struck late on, after some defensive slackness from the Scots, to earn Nigeria a draw.

"It feels a bit like a defeat to be honest," added Mulgrew.

"It's just disappointing to lose a goal at that late stage, and in the manner that we did after defending so well.

"We just need to learn from it and move on, we know we can play even better than that, so it's encouraging.

"We're disappointed because of the late goal, but we'll reflect on it and there was positives."