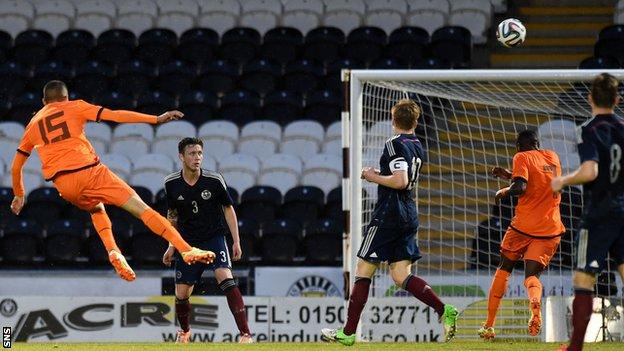 Billy Stark admits Scotland Under-21s were taught a "lesson" in finishing as the Netherlands beat them 6-1 in European Championship qualifying.

The defeat effectively ended Scotland's hopes of reaching next year's finals in the Czech Republic.

"That's the thing that's upper most in your mind, the finishing lesson," said manager Stark.

"They were exceptional finishes. And that's what good teams do, they punish you to the full."

Quincy Promes scored a superb first-half hat-trick for the Dutch to leave Scotland with a mountain to climb at St Mirren Park.

Karim Rekik made it 4-0 before Hakim Ziyech hit a double, with St Johnstone striker Stevie May replying for Stark's side.

And the manager admitted his team must be more clinical against the elite teams.

"In the first half we expected Holland to have a bit more of the ball and they did," added Stark.

"But we moved it quite well when we went up the pitch and had some decent chances. And that is the deciding factor, because if you score and go in front you take confidence from that.

"The substitutes they bring on, they don't lose any quality, and they're fresh and hungry, so there was no let up for us.

"I have to praise the character of the players, at half time we know the game is beyond us, we then lose a goal from a set piece five minutes into the second half and we had to dig in and fight as much as we could.

"For our boys it was a harsh lesson in terms of defence. In their own league in Scotland they get praised for playing well, but that's the measure, when you play against top international teams.

"But there's better teams than us that will suffer against that sort of quality.

"The small crumbs of comfort we can take is Stevie May got the goal back and that helped to show we didn't give up, we kept going, and we were beaten by a far better team."

The Scots are second bottom of Group 3, six point adrift of leaders the Netherlands. Stark's side's remaining two games are away to Slovakia and Luxembourg.