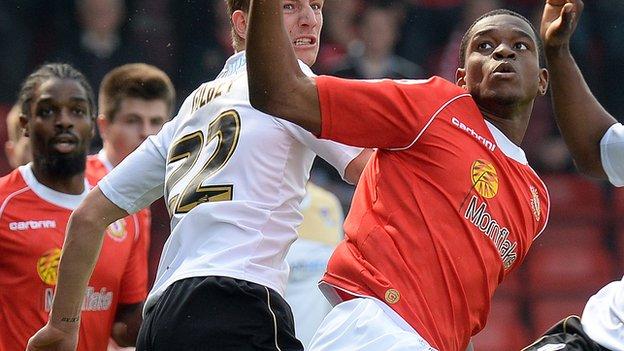 Coming on top of a two-year spell in which Nick Powell, Ashley Westwood and Luke Murphy have moved on for seven-figure fees, the Alex academy conveyor belt of talent may have slowed.

But Baker told BBC Radio Stoke: "Our loan players did well for us.

"If there's a gap in the structure, then we have to fill it."

Unlike some of their rivals, the self-sustaining Cheshire club do not use the loan market extensively.

Rivals Shrewsbury Town, just across the county border in Shropshire, used 20 separate loan players on their way to relegation back to League Two.

In contrast, Crewe deployed just seven but one of them - Arsenal's 20-year-old Chuks Aneke - finished as the club's 16-goal top scorer, in his second successive season at Gresty Road.

And 19-year-old Uche Ikpeazu's four late season goals following his arrival from Watford were the difference between staying up and going down as the Alex survived by four points.

"Some of our loan players didn't do as well as we expected," added Baker. "Having said that, most of them did do what we expected. And they're a big reason why we're still in this league.

"The summer signings we made weren't good enough. It's a reason that we had such a poor season, or rather such a poor first half of the season.

"But, of our loan players, Chuks Aneke played as well as anyone and, although Uche Ikpeazu may not be too pleasing on the eye, he gave us strength and power - and the goals he scored played their part.

"Our philosophy works and we continue to adhere to it. We want to work with homegrown players, but they've got to be good enough.

"We cant sign elite players. We have to produce them. We can't sign the Westwoods, the Powells and the Murphys.

"They've got to keep coming through the Academy. The Academy has to keep producing,"

Baker does believe, however, that, having stayed up, Crewe may now prove stronger for having blooded so much young talent over the last nine months.

"There's a lot of improvement in that team," he said. "A lot of potential.

"We've introduced a number of players for the first team this season that we might not have been expected to.

"Ben Garratt in goal - he's been one, Jon Guthrie is another and Harry Davis is still improving.

"Young Ollie Turton and Liam Nolan will improve and I don't think we've seen the best of Brad Inman yet.

"We have Ryan Colclough, who will play a bigger part next year and I still think Mathias Pogba is going the right way."